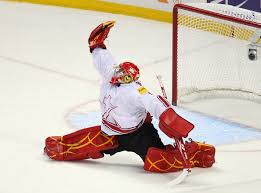 A few years ago before I joined this blog, one of my colleagues Alson Lee wrote an article asking why talented goaltender, Benjamin Conz of Switzerland never got signed to an NHL team. The article went on to list all of Conz’s notable achievements and expressed puzzlement at why no NHL team showed no interest in him. This article gives a part answer – maybe even the complete answer to that question.

The partial answer at least lies in Wikipedia when the current 2017 World Championship is selected as the topic. The article lists all the teams participating, all the results and when I last looked, the semi-finals Canada-Russia, Sweden-Finland had yet to begin. I don’t need to read the article anymore or even find out who wins the tournament to get my partial answer about Conz. The answer is in the composition of the semi-finals – four traditional “big 7″ teams competing as usual.

Over the last few years, I have written too many articles to count on this blog and others about international hockey’s greatest failure, the inability to expand hockey’s popularity beyond the traditional “big 7″ hockey powers, Canada, USA, Sweden, Finland, Russia, Czech Republic, and Slovakia. It has been 45 years since the famous Canada-USSR match of 1972 and since then the “big 7″ has never grown to even a “big 8″ or better. International hockey has failed to improve the quality of play outside of the traditional countries.

The Canada-USSR match revolutionized international hockey – to a point. Gone was the snobbish attitude of North Americans to European hockey. The closeness and caliber of the matches proved to everyone that at least in the USSR, Czechoslovakia, Sweden, and Finland, the caliber of hockey was equal or at least close to the caliber of North American hockey. It did not take long for the doors to open. Two years later, Borje Salming and Inge Hammarstrom crossed the Atlantic to join the Toronto Maple Leafs. The doors steadily widened until in 1989 when the Iron Curtain fell, it became possible for all Europeans, including Russians to join the NHL.

Today all NHL teams employ European scouts. It is now an essential part of every NHL team’s future development. But what does it mean by “European scouting”? I don’t really know but I have a strong suspicion about what it really means which explains the Conz situation.

As noted above, the USSR-Canada match revolutionized hockey to a point. Back in 1972 after the match and the desire of Canadians to see more high-caliber Canada-USSR, and other NHL Canada-European matches in the future, there were predictions and boasts that hockey would soon be the number 2 sport in the world behind only soccer. The recently revived World Cup, then called the Canada Cup would be created in 1976.

But the new developments in international hockey failed in one crucial endeavor; the quality of hockey failed to develop outside of the traditional hockey countries. Maybe the experts expected it to develop naturally, organically like it had done in the “big 7″, without help. Maybe they were just lazy, miserly and did not want to invest money in international hockey. But in 45 years, there is still the big 7 and nobody else. The current World Championship consists of the usual 7 and 9 “B level” countries. Gary Bettman symbolically recognized the lack of quality development at the revived World Cup when he created the hybrids team Europe and North America. He did not want any “B level” teams that might prove embarrassing.

Right now approximately 50 countries play international hockey, but there are about 12 countries who have been stuck at the “B level” of quality, just below the “big 7″. This group probably includes Switzerland, Denmark, Germany, France, Italy, Latvia, Belarus, Poland, Slovenia, Austria, Norway, and Kazakhstan. Over the years, the NHL hosted clinics and out of work coaches, seeking new challenges went to Europe to help develop young talent, but it was not enough.

At the World Cup Bettman and NHLPA leader Donald Fehr announced that Los Angeles and Boston would be hosting clinics in China. Commendable but hosting clinics for low-ranked China (The biggest potential market of them all. Money talks.) is not going to help hockey right now. It is getting the “B-level” countries up over the hump to make international hockey at least a “big 16″ that is going to bear the most fruit.

The clinics were as much as Bettman and Fehr were going to announce. The problem of raising the standard of play outside the traditional “big 7″ countries remains. No one has a concerted plan or announced any directive policy to correct this problem. Still worse is that probably most officials in positions where something effective could be done don’t see this as a problem at all. They are quite content with the status quo.

Back to Conz and “European scouting”. When NHL teams invest in “European scouting”, my guess is that the money is going to be spent on the tried and the true. That means most of the European scouting effort will be spent in Sweden, Finland, Russia, the Czech Republic, and Slovakia. Since all the other countries are perceived as inferior, there is going to be less time and effort spent in scouting countries like Switzerland where Conz plays. One just has to look at the composition of Europeans in the NHL. The vast majority come from the five countries listed above. Scouts are not going to spend much time and money in countries outside of the five countries listed above. Players from other countries like Conz are going to fall through the cracks.

Conz is further hurt by the leagues he plays in. Since he is playing in Swiss leagues where the competition is perceived as “inferior”, his achievements are going to be diminished even further in the scouts’ eyes. He would have done better in his junior years to try and play in a league in one of the five countries or best of all, try to get a position on a CHL team in either Canada or the United States where the competition is perceived as high caliber.

Hockey has paid a price because of the failure to expand the quality of hockey elsewhere. First with the lack of development, hockey can hardly claim to be the “number 2 sport in the world” with a narrow base of just 7 countries. Second, there is no way of knowing of the money that could have been made in other countries if the prestige of hockey had been enhanced by raising the standard of play in them and increasing its popularity. And third, which borders on tragedy, the amount of talent lost, that never got a chance to be exploited is incalculable. The European equivalent of Bobby Orr and Wayne Gretzky may have already come and gone without anyone knowing about it.

When one combines the populations of the twelve “B-level” countries listed above, it is easy to see the possibility of a huge glut of unrealized hockey talent waiting to be developed. But nobody in a responsible position for international hockey seems to have any imagination about realizing the potential. There has to be more vision and concerted effort instead of the dull, bureaucratic, unfocused and random occasional clinics and maverick coaches of the past 45 years.

I have written many articles on this blog about the NHL making an unspoken, unofficial commitment to becoming a 40 team league within the next two decades. Inevitably the critics are going to say that the league’s product gets “watered down” with each new expansion. But there would be no talent problem if the investment was made in developing hockey outside of the “big 7″ countries. Raising up the standard of play of just the “B-level” countries would tap a huge mine of unrealized hockey talent. There would be more than enough talent to stock the ten new teams that the NHL projects in the future.

Meanwhile the unrealized talent of the “B-level” countries and lower continues to be wasted because of the lack of vision. Players like Conz are not signed to NHL contracts probably because nobody knows about them. And until people with vision start running international hockey, players from other countries outside the “big 7″ are going to be passed over and not developed.