It’s what seperates the great from the good, and the drivers from the driven.

In hockey, there are two main ways to individually generate offence: shooting or passing. Most players generally rely on one of the two to create oppurtunities, and can be seperated into two categories accordingly: players that typically rely on shooting are categorized as goal scorers, while the athletes with a pass first mentality are grouped as playmakers. But not everyone can be easily divided. The best players are harder to sort. The Connor McDavid’s and the Sidney Crosby’s, can’t be put into just one section, because they excel at both. These players, commonly referred to as dual-threats, are the elite, the ones that can drive a top scoring line, and carry the complimentary player’s that do fit into those two categories.

Filip Zadina, ranked #3 for the 2018 NHL Draft, projects to be one of those sniper-playmaker combos.

Zadina is a great skater, and his hockey IQ is sky high, but his biggest goal scoring asset is his shot. He can snipe, both from a stationary position and on the rush. Zadina has 35 goals in 42 games this season, good for 0.83 goals per game. He generates plenty of shots from the shot, as evident from this shot map from Prospect-Stats, where all statistics and shot maps used in this post are from (as of Feb 11). 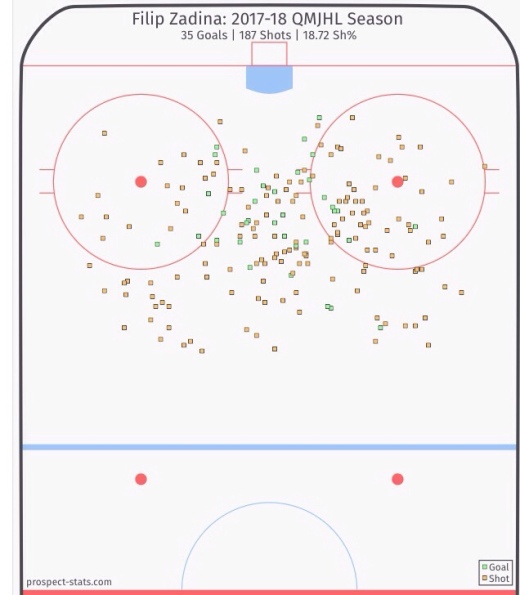 The shots are mostly sprinkled around the slot area, meaning that Zadina puts himself in good spots to score. The slot is the most dangerous place on the ice. Shots from that area, referred to as “high danger shots,” go in just over 20% of the time, while medium (~9%) and low (~3%) danger shots go in far less often. This means that players that generate a lot of high danger shots should score more goals, and in most cases, they do.

The more established three goal scorers (Kucherov, Matthews and Ovechkin), are all over 3 shots per game, while Karlsson and Lee, who are new to the top 5, are in the 2-3 range. This is a sign that they won’t become mainstays as top goal scorers. It’s more likely that they are just getting lucky, and a lot of their shots are going in right now. Getting plenty of shots is key to scoring plenty of goals, so players that don’t get a lot of shots are usually just riding luck and a hot streak. We’ll go with the established scorers, and say that the benchmark for a consistent scorer is 3 shots per game.

So far in the QMJHL this season, Zadina has 4.3, well over the benchmark. Obviously, it’s easier to get shots in the QMJHL than it is in the NHL, but even if he loses a shot a game somewhere during the transition, he’ll still be on par with the NHL’s top goal scorers in shots per game.

He’ll be on par with them in goals scored as well. The combination of speed, skill and smarts that he brings will be too good for him not to score 30+ goals a season.

Nikita Kucherov played his draft plus one season in the QMJHL, the same league that Filip Zadina is suiting up in in his draft year. A year older than Zadina, Kucherov scored 0.88 goals per game. Zadina has put up 0.8 so far this season, very similar, at a younger age. Zadina’s goal scoring statistics are on track with Kucherov, an elite goal scorer.

Goal scoring is only one part of a dual threat player. The other is playmaking, something that Zadina is nearly as good at as he is at scoring.

There are 3 key components of an elite NHL playmaker: vision, passing skill and the ability to open up passing lanes.

Vision is a player’s ability to find open teammates. Players with elite vision are able to find open linemates that don’t appear to be in their sightline. Zadina has that ability. He makes passes that leaves scouts wondering “How’d he see him?”

His overall passing ability is very good. He delivers crisp, tape to tape passes, and has a good understanding of the saucer pass. He knows how and when to elevate the puck, and he uses it to make passes when the defender has good stick positioning.

The future Czech star uses his patience and poise to wait for passing lanes to open up, and if they don’t, he does it himself, changing speeds, making sharp turns, and throwing in the occasional head fake to open up a cross ice pass.

He checks all the boxes of an elite playmaker, and barring a major developmental issue, he will be.

Filip Zadina has all the makings of a dual threat star, with elite goal scoring and playmaking ability. The Czech winger will be a star, and will have a huge impact on the NHL, the fortunes of the team that drafts him, and the Czech international hockey program. His combination of scoring and playmaking skill is rare, and the lucky team that drafts him will be thrilled to have that combo on their roster.