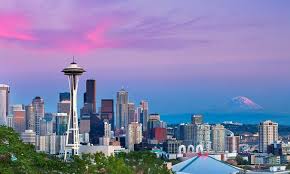 This is a no-brainer, a for-sure event. Unless something absolutely catastrophic happens, the NHL is not going to refund $650 million to Jerry Bruckheimer and David Bonderman. The NHL has been actively wanting Seattle for over half a decade and now with the renovation of the Key Arena and the appearance of Bruckheimer and Bonderman, it has finally come to pass. The faster this token “approval process” is over, the better for the NHL. Nothing is completely certain but for this to happen in 2018, my Predictability Rating is 99.9%.

2.     The NHL Realigns Into An NFL Structure

This will depend on how fast the NHL approves the Seattle bid. The way the unwieldy conference structure is right now is interesting but confusing for the fans and everybody else. Realigning into the easy to understand NFL structure of 2 Conferences, each with 4 Divisions of 4 teams with a revised playoff structure makes things easier for everybody to follow. To get to 32 teams for minimum realignment was one of the main reasons the NHL accepted an almost for sure Seattle bid. It also makes it easier to keep expanding the league to the next symmetrical number of 40 teams (5 teams to a division) and even 48 teams (6 teams to a division). As I’ve said in too many articles to count, there are approximately 60 major metropolitan areas in the United States and Canada (and growing all the time) so the NHL, the NBA, MLB, and the NFL are only a fraction of the size they could be. There are only two questions concerning NHL Realignment. First, will they announce it in 2018 which depends on how fast they officially approve Seattle? Second, since the NHL seems intent on becoming a 40 team league, will any other expansion cities be on board before they officially announce it? Predictability Rating: 80%.

3.     Houston Is Granted An NHL Franchise

This too is probably a “done deal” and again it depends on how fast the NHL approves Seattle. They will probably want to officially approve Seattle first before moving on to new expansion issues. The NHL is not in any hurry to get Houston in the league though it is an almost for-sure action, but they might be a bit anxious to get their hands on more expansion money which will be at least as much as Seattle if not higher. Predictability Rating: 60%.

Hartford has approved a $250 million expansion/renovation of its XL Arena to 19,000 seats. In 2010, NHL Commissioner Gary Bettman made a tour of the three cities that lost their franchises in the 1990s, Quebec, Hartford, and Winnipeg and offered them three terms for readmission to the NHL (Great fan base [no problem for all three cities]; A proper NHL arena; Acceptable ownership). Winnipeg was used to solve the Atlanta crisis and Quebec has been actively knocking at the door (see its situation listed below). Most likely the NHL will accept Hartford’s arena renovation plans just like they will approve Seattle’s renovation. So that just leaves the ownership problem to be resolved. Hartford made an active attempt to woo the New York Islanders by relocation which has now officially failed because the Islanders will get a new Long Island arena built. So the problem has become finding a rich investor, anxious to get into the NHL. Hartford with a proper arena is a sure money maker like Seattle so somebody is bound to appear though not necessarily this year. Predictability Rating: 40%.

5.     Another Western City Will Be Granted An NHL Franchise

There are lots of cities out west that the NHL would like see enter the league besides Houston. Milwaukee and San Francisco are already building new arenas though they might be too NBA basketball friendly for the NHL’s liking. Spokane and Saskatoon are long term possibilities. Right now the best possibilities are in Portland, San Diego, Kansas City, and Oklahoma City. Why would the NHL which will accept Seattle for sure and likely approve a serious Houston bid want yet another western city which will tilt league conference imbalance even further? So that the following can happen… Predictability Rating: 30%

6.     Resolution Of The Quebec and Arizona Problems

There is very little chance of the citizens of Phoenix approving a new downtown arena for the Coyotes. Even the NBA Phoenix Suns has declined to go into partnership for a new arena and instead further insulted the Coyotes by renovating its own arena to make it more basketball friendly. At the same time the NHL wants Quebec back in the league, loves the fan base now grown to over 800,000, and the new Videotron arena which they have rewarded with a World Cup exhibition game and Montreal Canadiens preseason games, but cannot accept the current bidder, Pierre Karl Peladeau, an active, pro-separatist potential politician who made public, inappropriate, racist comments about the Canadiens owner, Geoff Molson and is considered too untrustworthy to ever be granted an expansion franchise. The NHL does not want to reject Quebec outright so their current status is officially listed as “deferred”. So moving the unpopular Coyotes to Quebec and adding two more western expansion cities is the obvious solution. This could happen… or it could not. There are other ways of getting more expansion money such as accepting Houston and Hartford now and postponing the Quebec/Phoenix problem still further. But adding Houston and another western city now and at the same time shifting the Coyotes to Quebec to get Peladeau out of the picture makes the most sense. It kills two birds with one stone. It adds two more western expansion fees plus any relocation fee the NHL might want to charge the Coyotes. Predictability Rating: 30%

It is all quiet now but in recent years, several players (most notably Alexander Ovechkin) have said that they want to play for their countries in the 2018 Pyeongchang Olympics in South Korea. The self-indulgent snobs of the United States and Canada using shallow excuses pulled the NHL out of the Olympics but said they might return in the future. This is clearly an insulting act against South Korea. One of the reasons that the NHL cites for its decision is that Pyeongchang is in a time zone that won’t attract North American television viewers. But the next Winter Olympics will be in China which is in the same time zone or worse, but the Chinese market is over 1 billion people which the NHL wants to exploit… not like “lowly” South Korea which “only” has a market of 50 million. The insulting, laughable hypocrisy of pulling out of South Korea only to go back into China shows the usual ignorance and disrespect of American businessmen and politicians. But a lot of people including many current NHL players, some of which are Americans themselves, consider the Olympics to be a “higher” event, worthy of more respect and reverence than the NHL is showing. As January moves along, the issue of NHL player participation is going to come to the fore. This has never occurred before so nobody knows what the outcome will be. There will probably be some kind of crisis, but nobody knows how big. Predictability Rating: 75%.

The NHL has officially pulled out of the Pyeongchang Olympics but the South Koreans may yet get the last laugh. They have improved their national team hockey program from almost nothing and are now so good, they won their World Hockey Championship Division level last year and got promoted to the top level this year when they will make their debut against “big 7″ competition for the first time. What a thing to happen for poor Bettman, just when he pulled the NHL out of Pyeongchang. Probably what everybody predicts is that the South Koreans, faced with tougher competition will lose every game and then be demoted back to the lower division with a pat on the back for improving so much. But if they do anything significant (even horrors! winning a medal!) and manage to stick around at the top level from now on, what’s Bettman and the NHL going to do? Will he be forced to invite them to be participants in the next World Cup of 2020? What a great way to promote the growth of international hockey which Bettman has stated he wants to do. Pulling the NHL out of Pyeongchang snubs a potential new, major NHL market of 50 million people. Everybody cheer for the South Koreans. Predictability Rating: Impossible to predict because nobody knows how good the upstart South Korean team will play against top competition for the first time. The prediction rating should be low… but almost everybody said that Canada would sweep the unknown USSR back in 1972 and look what happened. Anybody who wants to see international hockey grow should be cheering for South Korea in May.

I’ve just made predictions about the major long term issues that could affect hockey. There are others that could be addressed. The improvement of the quality of play in international hockey is probably the most important issue to be resolved if hockey is to expand world wide, but the likelihood of seeing anything positive done by the NHL and the international powers that be is probably 0% in 2018. Getting Hamilton or another southern Ontario team into the NHL should be a priority but nothing will be done. I have also refrained from commenting on the arena issues in Calgary, San Diego, and Ottawa.