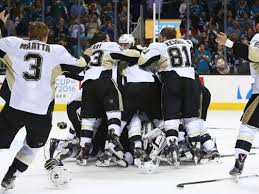 Something unthinkable in 1967, something laughable in 1979 could occur next year in Pittsburgh professional sports history. The Pittsburgh Penguins of the NHL have the opportunity to move into a tie to become the city’s most successful professional sports franchise. The Penguins have already tied MLB’s Pirates who have been around since 1882 with 5 professional championships. Next year they can tie the Steelers with 6.

That would seem unthinkable 50 years ago when the Penguins were born, one of six new teams in the first NHL expansion that doubled the size of the league. And Pittsburgh was the worst of the bunch. During the first few years the Penguins were the worst team in the league and seldom sold out their small arena. People wondered if NHL hockey would survive.

The Penguins then moved from bad to respectable mediocrity. They made the playoffs but were never a true Stanley Cup contender. Most of the years were forgettable and in 1983, Pittsburgh sank to the bottom again.

Then the Penguins got two back-to-back breaks. In professional hockey since the 1940s, Canada has always produced one hockey player who stands above all others both in the NHL and internationally, a chain that has always resulted in at least one Stanley Cup championship. Starting with Maurice Richard, this golden chain includes Gordie Howe, Bobby Hull, Bobby Orr, Guy Lafleur and Wayne Gretzky.

In 1983, with Gretzky just starting to reach his NHL prime, fans wondered who his successor would be and the Penguins would draft him in 1984, Mario Lemieux. And then years later they would draft Lemieux’s successor, Sidney Crosby. (Crosby’s reputed successor is Connor McDavid of the Edmonton Oilers.) Since 1990, the result has been 5 Stanley Cups.

Now the Penguins who never compared with the Pirates and Steelers before are poised to become Pittsburgh’s greatest sports franchise. They are now already the NHL’s most successful American expansion team with 5 Stanley Cups one more than the legendary New York Islander teams that won 4 in a row. And they are currently tied with Edmonton which has also won 5 Stanley Cups as the most successful expansion team in NHL history.

The current team is so good it won the Stanley Cup without its best defenceman Kris Letang playing a single playoff game, and their best goaltender, Matt Murray missed three quarters of the playoffs. They are good enough to win for a third time in a row and perhaps even more.

They have already tied the New York Rangers, one of the “Original 6″ teams with 5 Stanley Cups. If they win again next year, they tie two more “Original 6″ teams, Boston Bruins and Chicago Blackhawks with 6 victories and have the title, “greatest NHL expansion team”, all to themselves.

The Steelers are the all time Super Bowl Champion leaders with 6 so a victory by the Penguins next year puts them on an equal footing. And if they win again next year, it means 3 in a row, something neither the Pirates or Steelers have ever done.

The Penguins have already paid a visit to the Steelers training camp with the Stanley Cup and Sidney Crosby, on behalf of his Penguins teammates threw out the first pitch at a Pirates home game. So the friendly rivalry is on. The Penguins started out late compared to their MLB and NFL cousins and for just over two decades were in the doldrums. But in the last quarter of a century, they have caught up in a hurry and have a real chance to become Pittsburgh’s greatest professional sports team, something nobody would have dreamed of, half a century ago when the franchise was born.

3 thoughts on “Next Year The Penguins Challenge The Steelers”