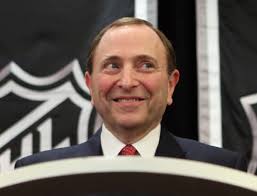 So far 2017 has been a mixed bag of goodies for NHL Commissioner Gary Bettman. There are some good things he can take credit for. The NHL Centennial celebrations are going well. Edmonton has opened a stunning new arena that Bettman has vowed to reward with an All Star Game and an NHL Draft. This fall, Detroit will open another one. And it looks like Ottawa, especially after its success in the current NHL playoffs will get its new downtown arena approved. And (only a partial success, the NHL wanted more expansion teams) the NHL will get its 31st team, Las Vegas competing this fall. Internationally, bringing back the World Cup was at least a partial success and the NHL has recently announced it will play games in Europe again.

But behind the scenes there are major problems starting to pile up that must be far from being stored and filed away in the back of Bettman’s mind. Some are long term and can be postponed for a while but like the Atlanta situation a few years ago, some are coming to a head and have to be resolved sooner or later. In no particular order, here are some of the worst.

Gary Bettman made a tour of the cities that lost their NHL franchises in the 1990s, Quebec, Winnipeg, and Hartford, in 2010, and offered them reasonable terms for readmission to the NHL: A great fan base (No problem in all three cities), a proper NHL arena, and acceptable ownership (No mention of a $500 million entrance fee). Winnipeg was used to resolve the Atlanta mess. But now Quebec has tried to comply with Bettman’s terms and has built an arena at taxpayers’ expense that the NHL loves just as much as the Edmonton one. They expect to be paid off and Bettman was openly consorting with both the Quebec City mayor and the Quebec provincial premier while it was being built.

The problem is the potential owner, Pierre Karl Peladeau is an unacceptable owner to the NHL (I’ve written lots of articles on this blog explaining why), leaving Bettman the problem of finding an acceptable owner behind the scenes for Quebec City. So far there has been no announcement of any resolution to this problem and the longer it drags on, the more embarrassing for everyone it gets. Right now the Quebec situation has been shelved under the term “indefinite suspension”, but it has to be resolved with Quebec getting back into the NHL somehow as soon as possible.

Bettman has fought tooth and nail to keep a team in Phoenix but it may be time to throw in the towel. Glendale has publicly declared that they do not want the Coyotes any more and has stated that an empty arena is preferable to having them play there. In response, Bettman stated that the Coyotes have no future in Glendale and need yet another new arena in the area to play in. A potential new arena in Tempe was cancelled. The Coyotes have turned to the Arizona State Legislature for assistance but it is doubtful that a financial bill will pass. There has been rumors that the Coyotes have been talking to Portland and Seattle (two much better hockey cities) about relocation. A more sensible solution would be to move the team to Quebec and then expand the NHL right away by two western cities. The NHL does not want to move any western team east because it would create more league conference imbalance but the solution I have suggested is probably the best way to resolve both the Quebec and Arizona problems.

3.    The Fate Of The New York Islanders

The Islanders play in the worst arena in the NHL with obstructed seats and bad ice, that they can’t sell out and need a new arena to survive. There is no way that the Islanders want to remain in the Barclay’s Center or return to a smaller seating Nassau Coliseum. Hartford, which is finally making an effort to get back to the NHL wants to turn the Islanders into a returned Whalers, but it would embarrassing for the NHL for a team with such a glorious history as the Islanders to disappear. The best hope for the Islanders would be constructing a new larger arena solely for them. A couple of places have been cited but nothing concrete has been committed to.

Bettman and the NHL Board recently closed the door on “unglamorous” Pyeongchang, South Korea for the 2018 Winter Olympics. But now has come unexpected, unbelievable news. From virtually out of nowhere, South Korea has improved its national hockey team to be good enough to be promoted to the top echelon of the World Championships. How good is this team? Next year South Korea will be competing against the very top “traditional big 7″ teams in a major international tournament for the very first time. Most likely they will just get their feet wet, lose every game, be demoted, and thanked for an historical break-through try. But if unexpectedly they do ANYTHING at that tournament that is going to be extremely embarrassing for Bettman and the NHL.

Pulling out of the Olympics in South Korea has really put Bettman and the NHL between a rock and a hard place now that South Korean hockey has improved. What if the unknown South Koreans are good enough to beat the any of the “big 7″ teams, especially Canada and the United States, are good enough after 45 years of stagnation to expand the “big 7″ at last into a “big 8″? Bettman who has brought back the World Cup after over a decade of dormancy and wants to expand and improve international hockey can hardly reject South Korea on one hand and then not be pleased at South Korea’s progress. South Korea has the potential to be a major new market not only for international hockey, but for the NHL itself. If the South Koreans are that good, Bettman will be forced to invite them to send a team to the 2020 World Cup. Pulling out of Pyeongchang so quickly has damaged the NHL’s entry into a major new hockey market.

Sticking with international hockey problems for the moment, Bettman and the NHL have to finally start facing up to the problem of improving the quality of international hockey honestly. In fairness to Bettman, he is not to blame. This problem has been around long before the USSR challenged Canada in 1972. Bettman himself recognized this problem by creating hybrids “Team Europe” and “Team North America” for his revived World Cup instead of inviting any “B-Level” countries. In the 45 years since 1972, the “big 7″ have not grown into a “big 8″ or more. Specifically, improving international hockey quality should mean getting the large group of countries stuck at the “B-level” of play (There are about a dozen of them. I’ve listed them in other articles. Now South Korea has joined them.) finally over the hump so that they can compete equally with the “big 7″ teams and be able to win major international tournaments like the Olympics, the World Championships, and the World Cup.

Back in 1972, after the Canada-USSR match, there were boasts that hockey would “become the number 2 sport in the world behind soccer”. But hockey can hardly match soccer’s global reach and status if it is stuck at a narrow base of 7 countries. If Bettman wants his World Cup to start getting the status of soccer’s World Cup, the “big 7″ have to be expanded, hopefully at least to a “big 16″. Another practical reason to do this is that the NHL probably wants to expand to 40 teams within the next two decades. Each time there is expansion, the critics complain that the league gets “watered down”. But if the quality of play in the “B-level” countries were improved, there would be a huge new glut of talent to draw from. And improving the quality of play in these markets will probably increase attendance and interest in hockey bringing in more money for both international hockey and the NHL.

Quebec is not the only Canadian problem for Bettman and the NHL. When he was hired, Bettman was probably told by the Canadian franchise owners of the NHL to preserve their monopoly in Canada. They have welcomed back Winnipeg and are willing to accept Quebec City with proper ownership. But for the new 10 franchises that the NHL wants to create in the next two decades, at least one of them HAS to be a new southern Ontario team, either in Hamilton, second Toronto, London, Kitchener, or Oshawa. Bettman must start convincing the Canadian NHL owners to accept a new southern Ontario franchise and to set an acceptable compensation package for Buffalo and Toronto like Los Angeles and New York have done in the past.

If the NHL reaches 32 teams, they can realign into an NFL structure; 2 Conferences with 4 Divisions that have 4 teams. This is also an ideal structure to expand the league to the next symmetrical numbers of 40 teams (5 teams to a division) and even 48 teams (6 teams to a division). But one of the problems is WHERE these teams are located. Right now Quebec wants back into the league and Hartford is making noises about returning too. This will tilt the conference imbalance still further. The recent NHL expansion was a failure. The NHL probably wanted an expansion of four teams; Quebec and three western teams, making the league a balanced 34 team league of two equal 17 team conferences, set in the NFL structure listed above and a commitment to becoming a 40 team league. Instead the NHL only got Las Vegas, Quebec is still out of the league and the NHL has not been able to realign. And no eastern team wants to be shifted west unless it was for a short, temporary period. This problem has to be resolved as soon as possible.

If Bettman and the NHL can be placed between a rock and a hard place by South Korea, they are already in one because of NHL expansion. As noted above, the recent NHL expansion was a failure. It was probably the first time in the history of North American “big 4″ sports that there was no competition between rival cities for a new franchise and the NHL had to settle for what it could get. Of 16 potential bidders, all dropped out except for fanatical Las Vegas and Quebec City, probably because the $500 million expansion fee is considered too much for an NHL team by the business world. In contrast, there were 11 bids for an expansion team, including three from Houston alone back in 2000 when the expansion fee was $80 million.

How is the NHL going to expand if nobody wants to bid? And the league cannot solve its realignment/conference balance problems unless the league expands. One solution is to hold out, let time pass until the business world accepts a $500 million expansion fee. But how long will that be? The other loss of face solution is to refund some of the money to Bill Foley and then set a lower expansion fee that the business world will accept. Obviously the second solution is going to churn the stomachs of Bettman and the NHL governors but if they want to realign and expand quickly, it may be the only solution.