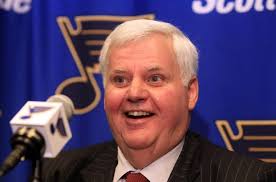 Ken Hitchcock was supposed to retire from NHL coaching at the end of this season and Mike Yeo take over next year. Instead the St. Louis ownership and management speeded up the process by firing Hitchcock after the Blues tumbled out of a playoff position.

What was not said was that during the off season, the St. Louis Blues like the New York Islanders lost significant talent and therefore could not play at the level of last year. When the two coaches could not repeat last year’s breakthrough success, they lost their positions, becoming the second and third coaches after Florida’s Gerard Gallant to be fired during the current season.

There is a similar parallel in both the Blues and Islanders story. Last year for the first time in eons of seasons, the Islanders won a playoff round. Last year for one of the rare occasions in their history, the Blues won two playoff rounds and made it to the Western Conference Final where they put up a good struggle against the San Jose Sharks.

It seemed that all management had to do was add some significant talent to take the Islanders into the ranks of the true contenders in the Eastern Conference and to get the Blues over one more hump and into the Stanley Cup Final, a round they had not reached since the first three years of their existence. Instead both teams lost talent and now are struggling to make the playoffs. That is hardly the coach’s fault.

Additionally for the Blues, management decided to trade Brian Elliott and hand the goaltending job to Jake Allen who has given the Blues subpar goaltending. That is not Ken Hitchcock’s fault either.

The Blues took Hitchcock’s firing out on the Toronto Maple Leafs, ironically the team they are tied with for longest streak without winning the Stanley Cup, 50 years. The St. Louis Blues are the only team from the first six-team expansion; Pittsburgh Penguins, Los Angeles Kings, Philadelphia Flyers, Dallas (Minnesota) Stars (California-Oakland Seals no longer exist), to not win the Stanley Cup. But whereas the Maple Leafs with new ownership, management, a Stanley Cup winning coach, a new young star in Auston Matthews, look like a team on the rise, the Blues with their established stars with whom they failed to build a champion, look like a team going downhill and will have to be rebuilt.

How close were the Blues to being a champion? They finally broke through to the third round last year. Admittedly they would have to add more talent to get beyond San Jose and San Jose was no match for Stanley Cup Champion Pittsburgh. Obviously management and ownership did not believe that they were close with last year’s roster and allowed significant talent to leave. That left Hitchcock to play out the string this year which management saw fit to shorten by three months.