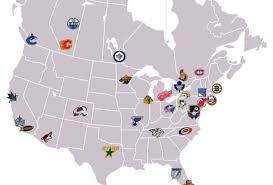 More NHL expansion is on its way. The question is when and what form will it take. The NHL was not happy with the way the last expansion went. What they wanted was Quebec City and three western cities to balance up the conferences and realign the league. Instead they got an expansion with no competition between cities, maybe a first for a North American “big 4″ expansion process (There were 11 bids during the previous NHL expansion). Only fanatical Quebec and Las Vegas went all the way and the Quebec bid was unsuitable right from the start because the owner of the bidder, Quebecor, Pierre Karl Peladeau, made unacceptable racist remarks about one of the NHL governors, Montreal Canadiens owner Geoff Molson.

So the NHL only ended up with Las Vegas and one $500 million expansion fee. Now they have 31 teams which not only fails to balance up the conferences, but prevents league realignment into an NFL type structure of 2 conferences, each with 4 divisions containing at least 4 teams each. This kind of structure will make it possible to expand easily to the next symmetrical number of 40 (5 teams to a division) and even to 48 teams (6 teams to a division). Since there are approximately 60 major metropolitan areas in Canada and the United States, there are lots of potential sites to expand to and lots of money to be made.

Obviously the NHL needs expansion to completely balance the conferences and make realignment possible. Much of the timing and type of expansion depends on the Quebec situation. Commissioner Gary Bettman encouraged Quebec to build the new Videotron arena and consorted with both the Quebec City mayor and the Quebec Provincial Premier. Probably privately he told them that Peladeau was an unsuitable owner but to keep building an arena while behind the scenes he searched for a new owner.

But maybe this search has proved tougher than expected. Since the search for a suitable owner for a Quebec City team is being done behind the scenes, it is difficult to know what exactly is going on and if any progress is being made. Are there suitable rich French Canadian owners available and if not will Quebec accept ownership from anglophone Quebecers, Americans, or investors from “English Canada”? Will Peladeau retract his remarks, publicly apologize to Molson and then be considered an acceptable owner by the NHL Board? The NHL is prepared to live without Quebec indefinitely and they will not tolerate an unsuitable owner.

The other problem that the NHL and Bettman face is that their greedy $500 million expansion fee is not what the business and investment world consider to be a fair market price for an NHL expansion team. Of 16 potential bids during the recent expansion, only Quebec and Las Vegas were prepared to go all the way. Does the NHL set a new, lower expansion fee that will attract more bidders, which would probably mean eating humble pie and refunding some of the expansion money to Las Vegas, or do they stick to their $500 million guns? That could mean a long wait between expansions, leaving the league unbalanced and not realigned.

Because everything concerning NHL expansion is currently uncertain and in flux there are several possibilities for expansion. Here are the choices.

Right now this is Bettman’s preferred choice. This means that the NHL can grab another $500 million expansion fee and realign immediately. It would fulfill Bettman’s promise to Quebec, Winnipeg, and Hartford that he made in 2010, that if they met certain conditions, they could rejoin the NHL. It means that additional expansion to balance up the league can be postponed temporarily in hopes the value of an NHL franchise will rise in the business world or at least give potential investors more time to reconsider and accept a $500 million expansion fee. And also for the NHL, if Quebec could be admitted for 2017, it would be a fitting gift for Canada which is celebrating its 150th anniversary and for the NHL itself which is celebrating its 100th anniversary, by restoring Quebec, a founding member of the NHL, to the league.

The problem with this option is that when the league realigns, probably either Detroit or Columbus will have to shifted back to the western conference which neither team wants. That means that two more western expansion cities will be required and while expansion can be postponed temporarily, the new situation cannot be tolerated for a long time, meaning that further expansion will not be announced right away but soon. That might bring the question of the expansion fee and a possible refund to Las Vegas and Quebec to the fore again.

2. Gary Bettman does not find an owner for Quebec City and the NHL only expands by one western team. Quebec remains on the outside looking in or Bettman permits a weak Eastern Conference team to be shifted to Quebec.

This option allows the NHL to realign and be balanced. The favored choice was Seattle but they blew their chances by failing to resolve the arena issue. The greedy expansion fee also scared off other acceptable cities like Portland, Houston, Milwaukee, Kansas City, and Oklahoma City. The advantage of this option is that there only needs to be one western team to make a bid. Whether the NHL gets another $500 million expansion fee or has to revise that fee and make a refund to Las Vegas would have to be determined. The disadvantage is that Quebec City is still waiting on the outside looking in which is an embarrassment to the NHL and to Bettman personally because of his promise and his encouragement to important Quebec politicians to spend nearly $400 million tax dollars on a new arena. But the NHL is perfectly willing to wait until a suitable Quebec owner appears.

In the franchise shift situation, Quebec gets an existing Eastern Conference team. The advantage is that a weak, poorly attended team becomes an instant strong one. The disadvantage is that shifting an American team to Canada is another blow to the status of the NHL in the United States. Unlike the NFL, the NHL is reluctant to shift franchises unless they have to, as was the case in Atlanta.

3. Gary Bettman finds or does not find an owner for Quebec City and the NHL expands by one eastern team and two western teams.

This is probably what Bettman and the NHL wanted in the first place. They had their eyes on a $2 billion expansion fee profit. The NHL will accept an eastern city, though not necessarily Quebec, plus the two necessary western cities for both realignment and conference balance. It will also definitely set the NHL as the first “big 4″ league to be on its way to the next symmetrical number of 40 teams. It is a virtual commitment to add 6 more expansion teams in North America within the next two decades if not sooner. Other candidates besides Quebec for eastern expansion are said to be Hamilton or Toronto in southern Ontario and the NHL would definitely take Hartford back if it would resolve its ownership and arena issues. There could also be surprise bids from cities like Cleveland, Cincinnati, Indianapolis, or another southern American city.

Expanding by three cities would almost certainly bring the question of the amount of expansion fee to prominence again. There is a good chance that the NHL would have to refund some money back to Las Vegas and to revise its fee to meet true market value. It might solve the Quebec problem… or it might not.

Though not announced more NHL expansion is not far from the minds of the NHL Commissioner and the Board of Governors. The NHL cannot remain unbalanced and not realigned. Those two factors alone make NHL expansion virtually a firm commitment.