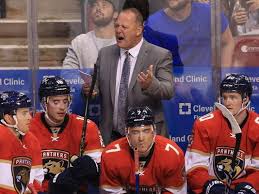 And now for some funny news. Want to know why the Florida Panthers seldom make the playoffs? Want to know why they usually have poor yearly attendance? Want to know why when people talk about shifting franchises to better markets, Florida is always mentioned? (Holding your breaths Quebec fans?) Well Florida just fired its coach, Gerard Gallant yesterday after losing to the improving Carolina Hurricane.

Poor Gallant just didn’t do enough. After all he only led the Panthers to a division title last year, was the runner up in the coach of the year ballot, was only one of four coaches in Panther history to get them into the playoffs, had a total record of 95-65-25 with Florida, and even had a winning 11-10-1 record this year when he was fired. No, he just didn’t do enough.

It is decisions like this that makes people with knowledge about hockey smile, shake their heads, and then laugh to themselves when they think and talk about the Panthers. The Florida (Miami) market is one of the most precarious in the NHL (along with Phoenix, etc.), and a large reason for it being so fragile is the horrible record it has amassed since it made the Stanley Cup Final in 1996, two decades ago. Since then they have iced bad teams, drafted poorly, failed to develop their young talent properly, and seldom made the playoffs leading to declining interest in hockey until the very existence of the franchise is at stake.

The coach takes the material that the management gives him and tries to mold it into a winning team. Gallant’s winning record since he joined the Panthers shows that he did a good job. But the coach does not build the team and the Panthers horrible record of the past twenty years is an account of bad management and ownership. Even last year with its division title, there were symbols of the  rot at the upper levels of the team. When your best player is legend Jaromir Jagr, now 44 years old, well past his prime (this is no derogatory comment on Jagr’s play last year or his remarkable career), what does that say about the rest of your team?

Where are your top draft choices after twenty years of horrible play? How are they being developed? Where are the smart trades to add to the core of young talent you are allegedly building a team around? If Jagr is your best player, you are not drafting the right young players or developing them properly. The only achievement that is noteworthy is that you managed to sign the right free agent, well past his prime, with some talent still going for him.

In assuming the coaching duties, General Manager Tom Rowe is starting to put his own position in the organization on the line. A few years ago the Toronto Maple Leafs were contending for the Stanley Cup playoffs when they suddenly fired coach Randy Carlyle, a former Stanley Cup winning coach with Anaheim. The Leafs promptly fell out of contention and finished near the bottom of the standings. If Rowe fails to inspire the players, that could well happen here and then the team he helped to build (his achievement?) will be exposed for all to see.

If that happens, the ownership and management may well regret firing Gallant. It may then be said that Gallant’s coaching was not only benefitting the Florida players, it was also concealing and protecting the management and ownership above him, those who have now showed an eagerness to dump him.

So the Florida Panthers and their ownership and management now embark on a new perilous path. Hockey fans may not be able to take this team seriously and the existence of the team may not last much longer in Miami if they continue to be chronic losers, but they are still always good for a laugh.