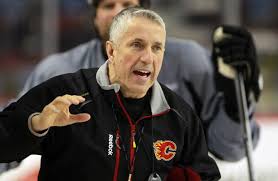 Too often the scapegoat is the coach where blame should have been placed elsewhere. That is the situation the Calgary Flames find themselves in today. The decision to fire coach Bob Hartley is coming back to haunt them in a hurry. It is only mid-November but the Flames are almost out of playoff contention already. The only thing that is keeping their chances alive is the overall weakness of the Western Conference teams. If the Flames were located in the Eastern Conference, they would be six points out of a playoff spot with no games in hand.

It was a hasty decision to fire Hartley, a coach who had won a Stanley Cup with Colorado, less than a year after he won the NHL Coach of the Year award for getting the Flames into the playoffs – the only Calgary coach ever to win the award – and winning a playoff round in 2015. In 2016, the Flames fell back to Earth and Hartley was made the scapegoat for their collapse.

The truth is that the Flames simply do not have the talent to compete. There is no potential young superstar like Connor McDavid, Auston Matthews, or Patrik Laine to build a team around. The Flames have not had a superstar since Jerome Iginla was in his prime. Hartley simply got his team of average talent to play harder and combined with steady goaltending, he squeezed everything he could out of it. When the goaltending collapsed and the talent could improve no further, Hartley could not camouflage things any more and the Flames fell into the position they now occupy. The Flames are only another version of Don Cherry’s “lunch pail” teams, trying to make up with hard work for the talent they lack.

The real blame for this situation is the ownership and management of the Flames which has not got the talent either by drafting or trading to compete even in the weak Western Conference. Sometimes coaches like Hartley can make chicken soup out of chicken feathers but it seldom happens. Management and ownership were riding on his coattails and when he could take the team no further, their acquisition of “quality” talent has been laid bare for all to see.

In the middle of all this mess is coach Glen Gulutzan in his first chance as an NHL head coach. Normally it is an exciting chance to get out of the minor leagues and up to the NHL, but he has come into one of the worst situations a new coach can enter. He would have been better to have declined the post and wait for something better to come along. Unless he can turn this team around – which the experienced Hartley, a Stanley Cup winning coach could not do – his NHL coaching career could be over after less than one season. Fans expect him to bring the Flames back to the playoff level Hartley got them to, but the early results show that the opposite is happening. The Flames are already competing for a high draft pick, not a playoff spot.

Right now, being a member of the Calgary Flames organization is not a happy place to be. This team needs talent, lots more of it to be competitive again. Changes have to come. The only question is will they include Gulutzan and those above him.