It looks like in the immediate future years, Canadian fans are going to be looking forward to seeing a Toronto-Winnipeg match. The CBC will insist it should be its feature match on Hockey Night In Canada on Saturday from now on.

This is because the two top draft picks of this year, Auston Matthews of the Toronto Maple Leafs, the number one pick, and Patrik Laine, the number two pick of the Winnipeg Jets have made such an impact in their initial games. Matthews scored four goals in his very first game against the Ottawa Senators, a new NHL record, and now Laine has answered him with a hat trick in their first head to head meeting.

The irony is that they play for Canadian teams yet Matthews is from the United States and Laine is from Finland. Such a Finnish-American rivalry is unprecedented in NHL history. But both should love playing in fanatical hockey loving cities like Toronto and Winnipeg where they will be the toast of the town and their skills appreciated.

About the only precedent for a personal international rivalry has been the Sidney Crosby-Alexander Ovechkin story but that has been fizzling out after so much initial promise. Ovechkin has lots of individual honors but nothing to show team-wise either in the NHL or in international competition. In contrast, Crosby has two Stanley Cups, two Olympic gold medals, and now a World Cup championship in which he was named most valuable player.

So a Laine-Matthews game promises to be an exciting event in the immediate future. For Jets fans, watching Laine must take them back to the days of Teemu Selanne, their only other NHL superstar besides Dale Hawerchuk. There will be comparisons between the careers of Laine and Selanne from now on. And for Toronto fans, their recent best player was American Phil Kessel. So both Canadian cities are used to seeing Americans and Finns lead the way.

But as well as Matthews, Laine will now test himself head to head against his other main rival, Edmonton’s Connor McDavid, Sidney Crosby’s heir apparent on Canada’s Golden Hockey chain, that list of Canadian hockey players who are better than any other current hockey players in the world in their generation. This chain stretches from the 1940s and includes Maurice Richard, Gordie Howe, Bobby Hull, Bobby Orr, Guy Lafleur, Wayne Gretzky, Mario Lemieux, and the current star, Sidney Crosby. There has never been a player from outside Canada to claim the title “best player in the world” except maybe the brief period when Lemieux temporarily retired and Jaromir Jagr was in his prime and Nicklas Lidstrom led the Detroit Redwing defense. 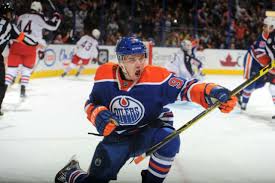 And Laine’s first match against McDavid will come in the outdoor showpiece, this Sunday’s Heritage Classic in Winnipeg when double the normal number of fans will get to see him. Three outstanding young players from three different countries playing in three different Canadian cities, vying at the same time for the title “best hockey player in the world”. That too is unprecedented in the NHL.

For Matthews, the only problem is that he plays in the Eastern Conference so he will only be playing against Laine and McDavid twice a year. But he will get to play against Crosby, Ovechkin, Evgeni Malkin and Steve Stamkos more often in compensation.

So Toronto, Winnipeg and Edmonton hockey fans are going to be entertained royally for quite a few years. Calgary, Vancouver, Montreal and Ottawa are going to be envious. And will any other new young stars join the triumvirate?