It starts with CHL and younger leagues. That is the meaning of the results of the recently revived World Cup Of Hockey. That is the reason for the huge gap in quality of play, now not only between Canada and the dozen “B level” countries which been around for too many decades to count, but now between Canada and the other “traditional 6″ hockey powers, Russia, Czech Republic, Slovakia, USA, Sweden and Finland. The World Cup was a total mismatch, with no real competition except two all star hybrids Europe and North America. All hockey fans are glad to have the World Cup back after 12 years hiatus but the tournament was an embarrassment.

There is only one good hockey country in the world now, Canada. They have stated in no uncertain terms that hockey is a Canadian game. If Canada wanted to get revenge for the humiliation of having no Canadian teams participate in last year’s Stanley Cup playoffs, they got it in spades. It is a good thing that the NHL is not organized on nationality lines with only Canadians playing for Canadian teams and Americans and the rest of the world playing on American teams. No American city would come within sniffing distance of the Stanley Cup – for decades.

All the World Cup did as a follow-up to the last two Olympics in Vancouver and Sochi was confirm how dominant Canada is in hockey, now pulling away from everybody else with no real competition in sight. And they did it without two of their very best players, Duncan Keith and Connor McDavid. They have now won 16 consecutive meaningful international games and that is no fluke. It is time for the rest of the world to wake up and address the gap in quality of play between Canada and everybody else or this gap will continue to the end of time. They have to do what Canada did in 1972 after the famous Canada-USSR match.

Back then there was almost total ignorance in Canada about the state of international hockey outside of its borders. The only warnings came from certain individuals who had been following international hockey for the previous decade and knew that amateur and minor league teams like the Trail Smokeaters who last won the World Championship for Canada in the early 1960s could not compete against the best of the world anymore and that only the very best players of Canada, playing in the NHL had a chance of winning. So ignorant was Canada about the USSR that it was even speculated that a team of NHL “goons” would be enough for an eight game sweep. 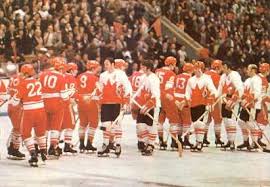 Despite narrowly winning the series 4-3-1, Canada ate humble pie – a lot of humble pie. The revelation of near defeat led to a revolution in Canadian thinking about many aspects of hockey. It was now recognized that some European countries and the United States were catching up in quality of play to Canada. They took the result seriously. There was no blindness to what was going on in the sport of hockey as there is today in international baseball with the United States scornful and degrading reactions to the repeated results of the World Baseball Classic (see my article about the state of international hockey versus international baseball on this blog about this matter). Canada was prepared to adjust to the new reality of international hockey conditions.

Before the series, it was possible for NHL players to spend the summer laying about and guzzling beer before training camp. It was recognized that the USSR nearly defeated Canada because of its superior conditioning. After the match with the USSR, woe to the NHL player who reported to his autumn training camp out of shape. It would now cost him his job. Better conditioning in hockey was a direct result of this first international match. This lesson and much more was absorbed by Canada.

The results of two Olympics and now the World Cup, 16 straight defeats shows that it is time for the rest of the world to eat the same humble pie Canada did. And the lesson of the World Cup is that no country can compete with Canada now and in the future until they revise their junior and younger programs in their own countries. The CHL is the most obvious example of Canadian domination. It has been and continues to be the best program for training young players at the junior level in the world. No one else is close.

Many of  the top European and most of the best American players in the NHL got their training and development playing for the Canadian and handful of American franchises in the CHL. So great is the desire to get in, that the CHL has had to put restrictions on the number of Europeans a team is allowed to employ. And why do so many junior Americans and Europeans want to play in Canada? Because the training and experience they get is the best in the world and if they distinguish themselves against the top Canadian juniors, a ticket into the NHL and guaranteed fame and riches will follow. If I am a boy with hockey skills who lives in Gettysburg, Pennsylvania, Visby, Sweden and Kazan, Russia, I want the chance to prove myself against the best Canadian boys because if I succeed, I’ll have picked up the skills and training needed to become a high NHL draft choice.

Now look at the ridiculousness of the current international hockey situation. When asked about how the composition of the American team which could not beat anybody was chosen, the answer from management was that they were chosen “to beat Canada”. But where do American and European boys have to go to get their best training and development? You got it, Canada, and what does that say about the quality of training that they get in their own countries? It is just not good enough and the result is two Olympic gold medals, a World Cup triumph, and 16 straight victories for Canada. If you say that your goal is to “beat Canada” but you have to send your best young players to your mortal enemy to be trained effectively, it is the height of absurdity.

It is now time for the rest of the hockey world to eat humble pie and study the lessons of these defeats. And the main lesson is to revise the junior and younger hockey programs and systems in your own land so that your country produces and develops hockey players of the quantity and quality that Canada produces. That is meaning of this World Cup. No country that seriously wants to compete effectively with Canada can avoid doing this. Producing a winner for the World Cup and the Olympics starts at the junior and younger levels of hockey. Countries that want to win will have to conform with the Canadian junior model or devise something better. Right now, everybody else is playing for second place.

There are approximately 60 CHL junior teams in Canada and the Northern United States, but you could double that number to 120 and stuff all the new teams exclusively with Americans and Europeans so long as they got the same training and development that Canadians do. Maybe then there would be some parity restored and a real expansion in international quality from the “big 7″ to the “big 16″. Let Canada train your children in hockey. They are the experts.

But the real solution is to set up junior systems in other countries that matches or exceeds the CHL. Until this is done, no country can be taken seriously as an international hockey power. Right now hockey is a Canadian game. There is nobody else.