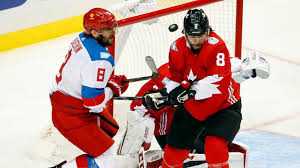 Well Russia improved; they made the semi-finals, the score was not the 7-3 laugher it was in the Vancouver Olympics in 2010, and they managed to defeat the Canadian “B” team (disguised as Team North America) along the way. Other than that, this World Cup is just another signpost about how far the country once ranked as the second best in the world, if not the best, has fallen in comparison to Canada.

And of course during this “Ovechkin era”, Canada made sure that Russia’s leader had a clean sheet again; his name does not appear in the scoring statistics. His team got treated the same way his Washington Capitals get treated, they either get upset by inferior opponents, or they cannot create an upset themselves. They are willing to let Alexander Ovechkin get lots of individual honors, but no team glory which severely tarnishes his career and reputation. He can drown his sorrows with his spiritual ancestor, Marcel Dionne, who had a similar career.

Statistics tell the story. You are not going to win a game if you give up 47 shots in three periods. That the score was only 5-3 can be attributed to Russian goaltender Sergei Bobrovsky. Goaltending may be the only position where there is any parity between Russia and Canada anymore.

Before the game, Team Canada tried to play down the “special rivalry” that has existed between them and Russia since 1972 and they were right. Russia is simply another team now, to be kicked aside in same manner the Canadians kicked aside the USA, Europe, and the Czech Republic.

Russian hockey is simply not what it was. In years past it had individual stars but it was the team collectively that shone together. Now Russia has some stars but no team. Ovechkin came into the NHL with the promise to be the first non-Canadian to be as good as the best Canadian, in this case Sidney Crosby. But Ovechkin’s career is only a shadow of Crosby’s who has two Stanley Cups, two Olympic gold medals, one in which he scored the decisive goal, and probably will add a World Cup Championship to his shelf of honors after this tournament is over. Crosby is a difference maker; Ovechkin is not.

Today Russia is no longer one of the two teams to beat. They do not scare anybody anymore. And that is sad. Russia versus Canada used to be the game everyone looked forward to, the marquee match of every international hockey tournament. Now it is just another game.