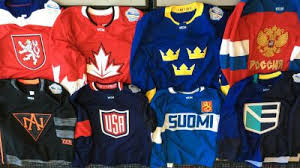 After a dozen years in the wilderness, the NHL is bringing back the World/Canada Cup last played in 2004 with the hope it will now be played on a regular basis, once every four years. It should be an event to celebrate for every hockey fan in the world who wants to see international hockey develop. But without detracting from its revival, the format announced betrays the failure of international hockey since the famous Canada-USSR series of 1972.

For a start there will only be 8 teams, Canada, USA, Russia, Czech Republic, Sweden, and Finland – and two put-together teams, Europe, which is supposed to made up of players from all other European countries, and North America which is being made up of Canadian and American players under the age of 23. It is the creation of these last two teams that shows the betrayal and failure of international hockey.

Immediately after the amazing series of 1972, there was recognition in Canada and the United States that European hockey players, particularly Russian ones were just as good as their North American counterparts and there was an immense demand to see more international competition between them and the best of the NHL. There quickly evolved the big 6 of hockey powers; Canada, USA, Russia, Sweden, Finland, and Czechoslovakia, which eventually split into the Czech Republic and Slovakia.

There were also frequent boasts that hockey would soon become the number 2 sport in the world behind only soccer. Hockey fans could dream of a truly world hockey tournament like soccer’s World Cup which currently starts with 32 teams.

But for all their talk about the promise of the future, hockey failed to expand and develop beyond the original 7 countries. In the 44 years since 1972, only in Switzerland and lately Denmark can it be said that the quality of hockey has significantly improved. When international hockey tournaments were held whether at the junior or professional level that had 12 or more teams, the big 7 would wipe out the other participants easily in the round robin first round. Most of these games against the lesser opposition would be boring routs in which the established hockey power might even reach double digits in scoring. Hence NHL Commissioner Gary Bettman’s attempt to avoid these embarrassments by creating Team Europe and Team North America.

But despite Bettman’s best attempts to make the revived World Cup more competitive, it does not disguise the overall failure of international hockey to develop and expand from the root seven countries. Slovakia is not even being allowed to ice a team, and Switzerland, the best of rest is not here either. These are dismal results for the past four decades.

Even more horrific is the state of international women’s hockey where only Canada and the United States ice competitive teams and there have been threats to expel it from the Olympics because of the lack of competitiveness.

It may surprise most knowledgeable hockey fans that hockey may well be the number 2 sport in the world. The loser of the A tournament gets demoted to the B level and the champion of the B level gets promoted up to next year’s A group. At the junior level there are at least 50 countries ranked so there are C, D, E, F, etc. tournaments too that are held each year. So there is no shortage of hockey players or hockey playing countries around the world.

The problem is that the quality of hockey drops off sharply after the big 7. As noted above, only in Switzerland and recently Denmark has there been any noticeable improvement. That is not much to show after 40 years. The “big 7″ countries simply have not done enough or cannot be bothered to spread and develop the game of hockey around the world to make it truly the world’s number 2 sport.

Even more embarrassing for hockey is the development of international curling during this time. It is now possible for even non-traditional curling countries like Korea and Japan in both men’s and women’s international competition to ice competitive teams that have a real chance to win the world championship and the Olympics. It may be an unfair comparison but curling has succeeded where hockey has failed.

If the big 7 countries would take the trouble to properly develop several of the countries stuck at the B level – Switzerland, Denmark, Austria, Germany, Norway, Latvia, Kazakhstan, Italy, France, Belarus, Slovenia, and Poland – never mind the rest, it would be possible to have a World Cup of 12 or even 16 teams, where each team has a real chance for victory and there would be a danger that one of the “big 7″ might get demoted. But for 40 years they have done virtually nothing and as result there is now Team Europe and Team North America.

It is often said that when the NHL expands, the product gets “watered down”. There would be no problem of that happening if the big 7 developed even a fraction of the B level countries to a competitive level. There would be enough quality hockey players to not only stock Las Vegas and Quebec but the next 8 NHL expansion teams up to 40. There is no problem with the number of potential hockey players or hockey playing countries. The problem is that there is no leadership from above that wants to develop them.