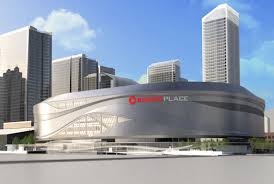 A milestone will occur in Edmonton when the new NHL season starts and the Oilers say goodbye to Northlands Coliseum, built during their WHA days and the home of the Gretzky glory era, and move into the new Rogers Place, hopefully to start a successful McDavid period.

There is no problem with the new arena. With 2,000 more seats than its predecessor and state-of-the=art technology, the Oilers future in Edmonton is secure for a long time. In my lifetime, Northlands Coliseum has gone from Canada’s newest, most modern NHL arena when the Oilers joined the league in 1980, to its oldest home rink. Along with the soon hopefully-to-be-restored Quebec Nordiques, Edmonton will enjoy the most modern sports facility in Canada. This leaves Calgary’s Saddledome, itself not that old, as Canada’s oldest NHL arena.

But will the team match its new facility? Along with Tampa Bay and Montreal, Edmonton made the most significant off season moves trading star forward Taylor Hall to New Jersey in return for defenseman Adam Larsson. They have also signed free agent forward Milan Lucic from the Los Angeles Kings.

With all its bottom finishes and high draft choices, Edmonton should have been in the playoffs, if not a Stanley Cup contender long ago. But even with the limited service of the injured McDavid, said to be Sidney Crosby’s successor on Canada’s Golden Hockey Chain, the Oilers still finished near the bottom last year. For the past half decade and more, this has been the NHL’s worst team for underachievement.

It is true that the Oilers’ worst problem is defensive help, and hopefully Larsson will be enough to finally make the team a contender, but the price was steep. Taylor Hall was by far the best of the high underachieving draft picks and along with McDavid, might have been the nucleus of a 1-2 punch the way the champion Penguins were built around Sidney Crosby and Evgeni Malkin. It might have been better if General Manager Peter Chiarelli had packaged together a bunch of the worst underachievers, Nugent-Hopkins, Yakupov, and Eberle instead. But the Devils were shrewd enough to ask for Hall as the price and Chiarelli complied.

So what is the final verdict to be? In my opinion, unless McDavid stays healthy for a full season, the Oilers are actually worse than before. I don’t think Larsson by himself is enough to turn the Oilers around defensively. The Oilers needed defensive players, not a defensive player. The Oilers had better hope that the star underachievers rediscover who they once were supposed to be and that somewhere on the rest of the team, some unexpected sleepers show the talent and determination to turn this team finally around.

As for the acquisition of Lucic, ex-Boston Bruin General Manager Chiarelli retrieving an old employee… Well the Los Angeles Kings signed Lucic to return them to the Stanley Cup Final and instead they were eliminated in the first round by the San Jose Sharks. So they are not shedding tears that Lucic is gone.

So my final prediction is that if I am in Edmonton, I’ll go to an NHL game to admire the new arena, for apart from McDavid (if he is fortunate to stay healthy for once) there will be little else to enjoy during the NHL season again.

2 thoughts on “Will The Oilers Be As Good As Their New Arena?”