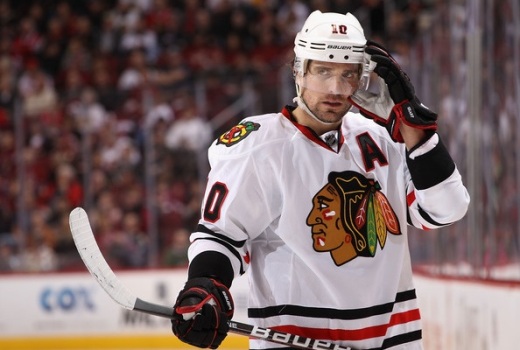 The Chicago Blackhawks are now on the sidelines but one the core members of their recent three Stanley Cup triumphs keeps on playing, Patrick Sharp, now with the Dallas Stars. Sharp had been a key member of the Blackhawks during those three NHL championships but the Blackhawks decided to let him go as a free agent most likely because he was now 34 years of age. He was promptly signed up by Dallas which was eager to get a player who knew how to win the big one and could pass the same spirit and knowledge on to the younger players of this up-and-coming team.

There is some logic to Chicago’s decision. Sharp was clearly past the prime of his career and Chicago wanted to free up some cap space to acquire and develop younger players. And even when the Blackhawks had Sharp, they were never able to win back-to-back Stanley Cups.

But the question is how much Sharp really deteriorated and will his absence have a negative long-term effect on the Blackhawks? Certainly Sharp was still contributing significantly to Chicago and Dallas’s decision to sign him shows that they believe he has much still to contribute in the later years of his career.

Sharp’s value really cannot be measured by his statistics. He was the type of player who would get the key, timely goal when Chicago needed it the most, especially in the playoffs. He was a key member of that inner core of Blackhawks, Toews, Kane, Hossa, Keith, and Seabrook whom Chicago built its Stanley Cup winning teams around. It is never easy to replace such a player.

Some players are born winners and they take whatever it makes them win with them when they depart from a team. Henri Richard was never the top player on any of his great Montreal teams, but he won 11 Stanley Cups during his career, more than many of his more famous teammates. Will Sharp’s departure have a long term negative effect?

One only has to look at one of the survivors in the second round of this year’s Stanley Cup playoffs, the Pittsburgh Penguins to see what can happen if the wrong player leaves. Pittsburgh drafted Sidney Crosby and Evgeni Malkin and seemed poised to win several Stanley Cups, the first of which came in 2009. But after that year, General Manager Ray Shero tinkered incorrectly with the chemistry of his team and Pittsburgh has been searching ever since. Both Shero and his coach, Dan Bylsma are now gone.

Sharp was never in the class of Toews, Kane, Keith, and Seabrook but he made a significant contribution, many times at critical moments when Chicago needed him the most. If the Blackhawks can find a similar, younger player, then they will be back again in the near future for more Stanley Cups. But the Pittsburgh example is a good warning of what can happen even with the best of players when they lose a teammate who may not have been as good as some of their top players, but played a significant role in putting a team over the hump. Time will tell if Sharp was that player.