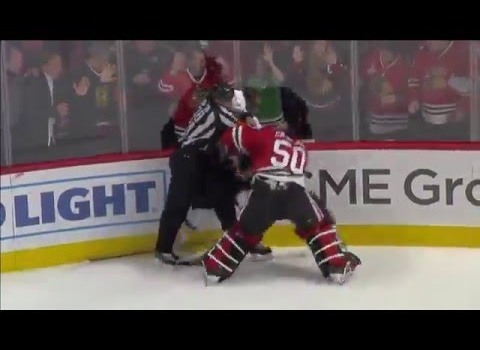 If you’ve found the time to read this article amongst the many blogs about hockey and the NHL, I’m pretty sure why. The mere thought of the NHL and it’s officiating system has hijacked your attention. Perhaps you recall a game where you were simply baffled at a ruling the men in pinstripes had concocted when they came to their decision? Even worse, their penalties had sent you into a downward spiral that brought about a hasty divorce proceeded by a trip to the medicine cabinet or the bottom of a bottle? Nonetheless, there is a systemic failure in the method by which the officials calculate infractions and shell out time in the sin bin and I’m here to explain  why.

Before I go ahead and annihilate the current system by which the NHL calls games, I would first like to point out how difficult being an NHL referee is. At the pro level, the game moves lightning fast, and referees consistently have to keep their head on a swivel so as to not get beaned with a puck or have a 220 pound behemoth crash into them while watching a play materialize. It is difficult and often painful work. When a linseman or referee takes a nasty spill during play most crowds erupt in joy. They view it as karma.

It is common knowledge that there are makeup calls in the NHL, instituted to bring about justice for the team that is shorthanded in error. The NHL brass has no problem with this since 4 on 4 play increases the odds of a goal more than playing at even strength. However, the questionable calls made do in fact have an impact. They confuse teams with regard to knowing what they can and cannot get away with. Each and every player in the NHL is looking to play as far close to the line without crossing over it, and when that line is moved by the officiating  crew it can change the flow of the game as well as a team’s momentum. Very seldom are penalties reversed after being called, but if the referees were given the ability to conference with each other briefly to discuss the matter and cancel the call, fans might see that the NHL agrees it is more important to get it right. After all, this was the reason the coach’s challenge was instituted in the first place.

Game 3 of the Blackhawks/ Blues first round series was one of the more physical games I’ve watched in this year’s playoffs, and turned chippy pretty quickly once the referees had lost control. It was at this time that Chicago goalie Corey Crawford decided to try and give his team a boost in momentum by getting into a scrap  with Robby Fabbri. Fabbri had been pushed from behind by Jonathan Toews toward crawford and was forced to do his best to avoid him. The minor contact Fabbri had made with the Chicago netminder gave him all the excuse he needed to go after Fabbri. Crawford knew deep down he was never going to recieve an instigator penalty  for the attack, nor was he going to be allowed to take a beating at the hands of Fabbri since either a referee or  teammate would come to his defense. It was a simple matter of risk vs. reward and in this instance there was no risk so why not? Well not only did Chicago get the boost in emotion they so desperately needed, but the advantage given was compounded when St. Louis was handed a penalty after the scrum. Let’s recap, Fabbri checked from behind, Fabbri punched by goalie when he wanted no part of Crawford, powerplay for Chicago and they score.

Is this the type of justice or fair play we can expect for the future of a game we passionately love. Why does Crawford get to stay on the ice and effect the outcome while Fabbri, one of St. Louis’ best penalty killers sits in the box helpless? I can only speculate that the NHL believes that goalies can only be victims and never the aggressor. If Chicago had won on Tuesday this play would have certainly been a rather large contributing factor.

NHL referees are not perfect, they are people after all. However, the manner in which officiating is allowed to influence a game’s outcome is disturbing. Referees generally attempt to levy an equal number of penalties on both sides so that nobody may question why one team recieved more than another, thus confirming their nuetrality. The fundamental flaw in this process is that one team is either being penalized more or less times than what they had  deserved. If the league truly wants an unbiased officiating system in place they must rid them selves of biased principles and think more black and white. A penalty is a penalty regardless of what the score is or how many your opponent has taken. Also, I do not understand how a player can be called for embellishment but their opponent always receives an offsetting penalty?  I can only imagine what it would be like if the US and Canadian judicial systems mirrored the NHL. You could very well have someone steal your car and once they were caught, share a cell with them.

One thought on “NHL Officiating a game in itself”