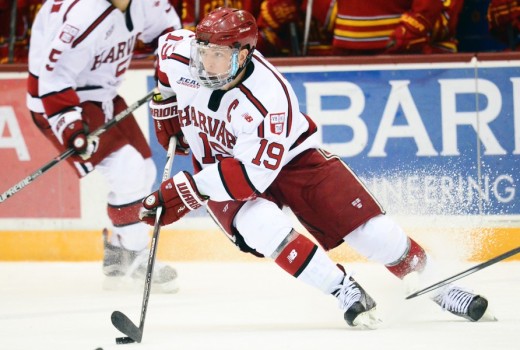 Jimmy Vesey has taken alot of flak lately, but for all the right reasons. As recently, as two weeks ago Predator’s GM David Poile and company had been hammering Vesey in the media. The Harvard Senior captain and two time Hobey Baker finalist had informed  the Predators he would not be signing in Nashville, choosing instead to become a free agent on August 15th.

To understand why Vesey opted to return for his senior season, it would help to understand Hobey Baker himself. The award, given annually to the top college hockey player in the land that exemplifies  character, ability, and leadership was named after the Princeton and St Paul’s graduate who had fought and died in World War 1. Baker was a quiet and humble man and regularly visited the opponents’ locker room each game to shake hands.

While many people in the hockey community have seen Vesey play, they don’t quite know the man himself. Vesey is a soft spoken, quiet young man. He attended Belmont Hill, a prep school that boasts St. Paul’s as one of it’s biggest rivals. It has been said that during his final year at Belmont Hill, in a player’s only meeting, Vesey suggested the team not keep individual stats opting instead to focus on becoming a better team. It was this type of mentality that contributed to NHL scouts missing the train on Vesey in his draft year as they were not fully aware of his statistical impact.

Over the last several seasons Princeton rival Harvard has experienced a hockey revival. They have consistently been one of the top hockey programs in the country and the ECAC in general boasts two of the past four national champions in Union and Yale. In fact, 7 ECAC teams in 2015-2016 have spent time in the top 20 of the Pairwise rankings, and Jimmy Vesey has been the league’s best player lifting the Crimson to new heights.

It can be argued that no college hockey player has shown more dedication to his school, teammates, and education than Jim Vesey. He has been nominated as a finalist for the senior class “class” award at one of the most prestigious universities in the world that boasts many of it’s future leaders in business, science, and politics.

Most parents would dream to have a child graduate Harvard. With Jimmy Vesey deferring two opportunities to cash an NHL paycheck and prioritizing his graduation over the NHL on his birthday no less, it has become apparent Vesey truly epitomizes the character and qualities of Baker himself. Come August 15th, 29 NHL teams will pick up the phone looking for a talented hockey player. What they are rewarded with could very well be an exceptional human being.