Every year, by the second week of February, anticipation starts to build as one of the winter’s greatest holidays approaches. I’m not referring to the American recognition of past presidents which falls on the third Monday each February, and I’m certainly not talking about the hollow celebration of corporate materialism otherwise known as Valentine’s Day. Among the most exciting occasions at the end of every February for hockey fans is the NHL’s Trade Deadline. The Trade Deadline arose from humble beginnings. Its concept is simple. After this day, you can no longer execute trades. But over the years, it has ballooned into a spectacle which can sprawl over days and into weeks of coverage as hockey fans everywhere eagerly await their team’s next move. Of all the major professional sports, hockey’s trade deadline is unique and perhaps the most exciting. No other sport matches the number, frequency, and overall impact of the trades surrounding the NHL’s trade deadline.

Over the years, there’s been a few duds. Occasionally, a deadline will pass without a major name changing homes; however, most often there’s a few splashy moves and some years there’s a wealth of trades to talk about. Last year, Winnipeg traded Evander Kane to Buffalo in a blockbuster deal following some tension in the locker room in the weeks leading up to the deadline. Perhaps the craziest deadline in recent memory was the 2013 Trade Deadline when 23 trades were executed in the week before the deadline. Days before the deadline in 2013, it was widely reported long-time Calgary Flame Jarome Iginla was being traded to Boston. Then, hours later, these reports were denounced and Iginla was ultimately traded to Pittsburgh — reportedly by Iginla’s own choice to select Pittsburgh over Boston. Boston then executed a trade for another Top 6 winger and acquired Jaromir Jagr before the two teams eventually met in the Eastern Conference Semifinals. The 2013 deadline also saw the trade of Marian Gaborik to the Rangers, Jason Pominville to the Wild, Steve Mason to the Flyers, and Filip Forsberg from Washington to Nashville in exchange for Martin Erat and Michael Latta (ouch). Overall, it was quite the event for hockey fans all over the place.

We’re almost ready for the 2016 edition of the deadline frenzy, and I can. not. wait. While the season thus far has already yielded a handful of notable trades, (Seth Jones- Ryan Johansen chief among them) the real fun is only beginning as the days go on. We got our first taste of the deadline this past week when Dion Phanuef was sent to Ottawa in a 9-player deal, and if that’s any indication, we should have another crazy deadline ahead of us this year to enjoy. With the February 29th Trade Deadline closing in fast, here’s a look at some of the major names that could be swapping jerseys before we get to March.

Big Buff just signed a fat 5 year, $38M extension. This probably signals the end of Andrew Ladd in Winnipeg. He’s been great for them, he’s their captain, but Winnipeg had to make a decision with five key players up for contracts this year, and with Buff’s extension, Ladd would seem to be on the way out.

There’s no reason for the league’s 26th ranked team to retain Ladd through the end of the season. The question becomes where does he end up. The guy won a Cup with Chicago in 2010 and can certainly help push a team over the edge, and in time we will see who takes the chance on Ladd for the final month + the playoffs, as there is a number of teams in playoff spots that could use some veteran stability in the middle of the lineup.

Likelihood he gets traded: 90%

This is a tough one. The only thing you hear out of Boston is how much they love Loui. How he does the little things. How he’s a consummate professional. How he’s a great two way player. What you don’t hear much out of the Bruins is that he’s a 30 year old winger who’s due to be paid upwards of $6M AAV this coming offseason. It’s made even trickier by the Bruins’ exceptional mediocrity. They’ve managed through 55 games to Jeckyl and Hyde their way through two-thirds of the season. This team took points in 13 of 14 games from November to December (23 of 28 possible points), but they’ve also put up some real stinkers like this week’s 9-2 blowout loss to the LA Kings, a 6-2 trouncing at the hands of the offensively challenged Anaheim Ducks and blowing a 3-1 in the 3rd period to the Toronto Maple Leafs. THE TORONTO MAPLE LEAFS, of all teams. For most of the season, they’ve played at a between those two points which does not instill much confidence in the team’s postseason aspirations.

With or without Loui Eriksson, the Boston Bruins do not look like a Stanley Cup team. Trading Loui Eriksson would yield some type of return, but consider a situation where the Bruins retain Eriksson through the end of the season only to have him depart for elsewhere come the offseason. In that scenario, the Bruins would be left with only Joe Morrow (36 NHL GP for the Bruins through 2 seasons) from their trade of Tyler Seguin to the Dallas Stars in July of 2013 shutter

Likelihood he gets traded: 40%

This one should be simple.

Can this Carolina Hurricanes team win a Stanley Cup? No, probably not.

Will Eric Staal sign an extension to stay in Raleigh this offseason? For less than $12M AAV, no, probably not.

Is Eric Staal a top tier player in the NHL still? Yes.

Unfortunately, as evidenced by the NHL franchise in RALEIGH, NC logic isn’t always at the top of the list in driving decision making. While Staal could net them a nice return, Carolina will likely retain Eric in order to keep his brother Jordan company en route to missing the playoffs for the ninth time in ten years. You know, because they’re the Carolina Hurricanes.

Likelihood he gets traded: 25% 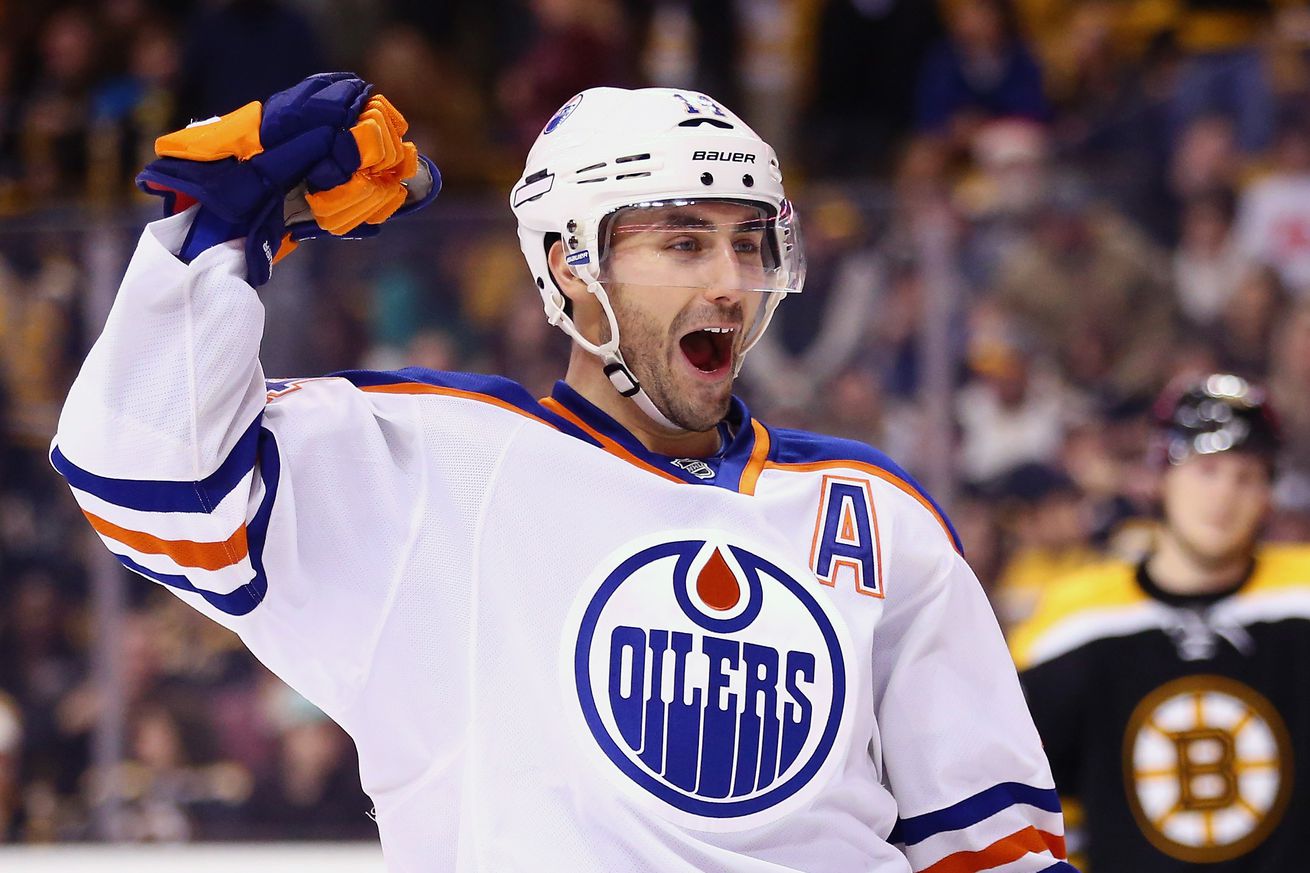 I feel like for as long as Jordan Eberle has been in the NHL, we’ve been talking about trading him. I think it goes something like this “yeah, Edmonton is clearly a couple years away, Eberle trade makes sense” and yet, despite four #1 overall picks in six years, the Edmonton Oilers are still a couple years away.

Unlike many of the other names on the list, Eberle is not a rental. He has three seasons remaining at an AAV of $6M, which is a sizable commitment. The motive to trade Eberle is more about what’s on the horizon in Edmonton. Through their continued futility, they’ve amassed an embarrassment of riches, especially at forward, and it seems Eberle, or perhaps Ryan Nugent-Hopkins, will be the odd-man out.

If Edmonton GM Peter Chiarelli pulls the trigger, it will be a big move. Eberle has never played in an NHL playoff game but has the skill set to help push a contender over the top. I hope, for his case, they can get him out of Alberta.

Likelihood he gets traded: 33%

Jiri Hudler has had a tough season. He had a hell of year last year, along with the rest of the Calgary Flames. His 2015-16 has been filled with injuries, and beyond that, the Calgary Flames look nothing like their 2014-15 counterparts. In all probability, Calgary will not be able to resign Hudler this offseason as a UFA. Calgary committed $35M to Dougie Hamilton in the offseason and have to pay both Johnny Gaudreau and Sean Monahan this offseason (yikes, ~ $6M AAV each?), along with Sam Bennett next offseason.

Hudler, at 32, is a veteran winger. He was a big contributer to Calgary’s run last year. He won a cup in 2008 as a rookie with Detroit. There’s little doubt that Hudler can help a team looking for some help in their Top 6. Calgary, at 25-25-3, should be sellers come crunch time, and Hudler is among their most attractive assets they have to trade. Given Hudler’s ceiling, experience, and cap hit, he and Loui Eriksson be among my top targets at wing if I were an NHL GM.

Likelihood he gets traded: 65%

This has been a discussion topic since August. It’s simple. Stamkos is a pending UFA. Tampa Bay can’t really afford him. I mean, they could, but at the expense of a number of other players – perhaps Victor Hedman, Nikita Kucherov, or others. Brendan Shanahan, Lou Lamoriello and hockey’s most lucrative franchise, the Toronto Maple Leafs, are patiently waiting to make Stamkos the highest paid player in the league shortly after July 1st. So what’s Stevie Y, and the Tampa Lightning, to do?

Most teams sitting in the 8th spot in the Eastern Conference would take the sure thing. They would deal Stamkos for a king’s ransom. If Arizona got Anthony Duclair and a 1st round pick for Keith Yandle, what’s the price for Steven Stamkos?

But there’s more to the story in Tampa Bay. Considering this is a team which narrowly lost in the Stanley Cup Finals last season, it’s a tough sell to trade away one of the planet’s best goal scorers. Especially when the Eastern Conference, apart from the Washington Capitals, is hardly a murderer’s row of opponents. While it’d probably behoove them to deal Stammer, I’m not sure Steve Yzerman has the guts to trade his team’s leading goal scorer, captain, and face of the franchise on the cusp of a playoff berth.

Likelihood he gets traded: 5%

Of course, these are just some of the headliners. Last year, there was over 20 trades on deadline day alone. There’s many more names that could potentially be moved, and surely a few that aren’t on anyone’s radar. The honorable mention for potential deadline targets includes Jonathan Drouin, Kyle Okposo, Chris Kreider, Sami Vatanen, Jamie McGinn, and every Maple Leaf not named Kadri, Reilly, or Komarov.