We recently caught up with Charlottetown Islanders goalie Mason McDonald! He’s is considered the second best goalie available in the upcoming draft. Here’s a quick scouting report from our friends over at ISS Hockey! 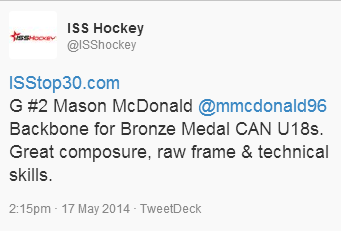 P.K. Subban is having a heckuva playoffs so far for the Montreal Canadiens and he didn’t slow down in Game Three against the Boston Bruins. Doubtless a polarizing player, Pernell Karl’s full personality was on display all night, especially during a roughly two minute stretch in the first period that begin with a missed hit on Reilly Smith.

Subban tried to stop Smith by introducing the Bruins winger to his backside when Smith was coming through the neutral zone. At the last moment Smith noticed Subban and was able to cut away from the full wrath of the defenceman’s attempted bodycheck – Thomas Vanek was not so lucky as he took the brunt of the hit that Smith dodged – but Subban got his elbow up enough that the referee sent Subban to the box for two minutes, max. Subban went to the box, expressly located the provided refreshments for guests of the bin and harshly deposited them to the ground. If he had debated with the referee more eloquently he would not have had any more luck so why not take out his frustration with the call on the water bottle.

Montreal killed off the penalty, and when Subban reentered play on the far side of the neutral zone Lars Eller was heading up ice and drawing the Bruins defenders toward him just enough that he was able to hit a wide open and streaking Subban with a pass at the Bruins blueline. The Bell Centre crowd was already buzzing from the successful penalty kill, and when Subban seamlessly received the Eller pass the volume went up a notch. Racing toward Rask – whom is the front runner for the Vezina trophy as this year’s best goaltender – Subban excellently faked a wrist shot, or maybe more accurately he started a wrist shot but halfway through decided to refrain from completing it when he saw Rask go down anticipating the follow through. Subban then took a step to his right and deposited the puck behind the outstretched Rask, not quite lanky or flexible enough to make up for the amount of net he gave up to Subban after buying the wrister he thought Subban was selling. The cameraman did his best to keep a stable feed for the viewers amidst the Bell Centre faithful’s elation. Subban scurried to his right, and punctuated a celebratory slide across the ice on one knee with a fist pump before being congratulated by his teammates. He’s often chided for such exuberance, but I defy anyone who would tell me they would control their emotions any better than the Canadiens defenceman did in such a palpable environment.

The goal would be a thing of beauty if it had been scored against the Phoenix Coyotes in September. But the sequence of events leading up to it – a sequence that showed us every part of the personality of the most polarizing Canadien – and that it was scored against the archrival Bruins in May made it an instant classic.

This year the event is taking place in London, Ontario. The hosting team the Knights will battle for the national title for the 3rd straight tournament in a row. They were in Shawinigan in 2012 and Saskatoon last year. Both times they did not win. Last month they had the misfortune of meeting the Guelph Storm in the OHL playoffs and played their last game on Friday April 11. They will have been off 35 days when they will meet the QMJHL champions on opening night. The Knights are 6th in the final Canadian Hockey League (CHL) Top Ten ranking.

That’s one team in. The three other teams are currently playing in their respective league Finals series so we have 6 teams left who are battling to take the road to London. Four of these teams are in the final CHL Top Ten ranking as well. The teams who will win the championship in the OHL, WHL and QMJHL get the ticket to dispute the national title. The hosting team is always in.

In the OHL the FInals series have started and it’s a 1-1- tie between the Guelph Storm (ranked #2 nationwide) and the surprising  North Bay Batalion. For knowing North Bay myself the fans there must be happy to have top level junior hockey back.

In the WHL the battle between the Portland Winterhawks (ranked #3 – CHL) and the Edmonton Oil Kings (again yes – ranked #8 – CHL) started last night and Portland won 5-2 on home ice. It might Portland’s turn this year to win the Memorial Cup according to experts so we will keep an eye on this series.

In the QMJHL I have watched both games that took place so far in Baie-Comeau (ranked #5) and the Val D’or Foreurs tied up the series 1-1 yesterday with a win in OT. Val D’Or has defeated the Halifax Mooseheads, the 2013 Memorial Cup Champions, in the semifinals series in 7 games.

Some Games 7 of current the three finals series are scheduled as late as May 13 and the tournament opens Friday evening on the 16th. I intend to write more about the event, teams and players to watch once we will know the Champions in each league. This was just a short briefing for now.

We’re less than an hour away from the beginning of the Eastern Conference semifinals series between the Montreal Canadiens and the Boston Bruins but it sure has been a long awaited one for the fans here in Quebec. After all this is one of the biggest rivalry in professional hockey if only for the fact that these two teams have met in the playoffs many times and there were often a lot at stake. The Bruins and the Habs have been in the same division for as long as I remember and the confrontations have turned ugly in many occasions. To sum it up, these two teams don’t like each other. The Bruins fans hate the Habs fans and I can confirm that the same feeling is mutual.

This season the Bruins played one of their most complete games of the season while defeating the Canadiens 4-1 on March 12 at Bell Centre. However, the rest of the season series belonged to Montreal who won two games in regulation and another in a shootout. Last season Montreal did very well against Boston as well so the team and the fans are pumped up. Perhaps too overconfident for my own taste. Carey Price was a disaster in the net against Ottawa in the first round of the playoffs last year. This year it was another story. He was Canada’s goalie number one at the Olympics and Stephane Waite – former Hawks goaltending coach – worked with him a lot to improve on his concentration. He delivered and the word in Montreal is that he will have to steal 1 or 2 games in this current series for Montreal to move on to the Conference Finals. So Price will have a lot of pressure again but it looks like he will be able to handle it this time. The rest of the team is healthy. Vanek, Pacioretty, Desharnais and Subban – Brière to a certain extent – are expected to provide some scoring. Plekanec is a good all-around player but he has the tendency to turn into a ghost during the playoffs. The Habs are known to be smaller as far as size is concerned and this will particularly hurt them as the series will progress. The Bruins are much bigger and they can hit. They have a reputation for being tenacious and they can score to come back late in any game. Take a look at all the stats a team must have and you will see the Bruins up there among all the 30 teams during the regular season. Against Detroit they were caught by surprise in Game 1 at home and after they were perfect for the rest of the series. And while all this was happening Tuukka Rask was nominated as candidate for the Vezina Trophy. No need to add anything in his case. It’s his turn this time as Tim Thomas is no longer there.