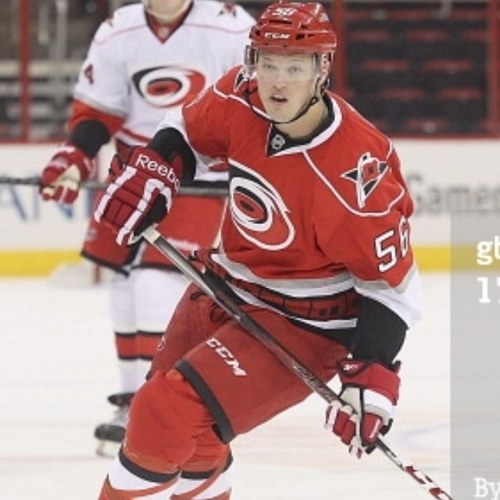 We recently caught up with Charlotte Checkers’ forward Brendan Woods. He was drafted in the 5th Round (129th Overall) in the 2012 NHL Draft. He decided to play for the University of Wisconsin for two years after juniors. He’s a great guy and he’s an even better Twitter follow so make sure to follow Brendan on Twitter @SkeeterWoods21, and make sure to like us on Facebook and follow me on Twitter: @HkyBlogger and https://www.facebook.com/NotYourAverageHockeyBlog. Without further to do, here is our interview with Charlotte Checkers forward Brendan Woods.

What type of player do you consider yourself?
I guess I’d consider myself as a power forward, a guy who tries to create energy every shift, whether it’s a big hit or driving hard to the net to get a greasy goal, or if need be to drop the gloves for a teammate.

So you’ve been in a few fights, how do you justify getting hit in the head repeatedly?
Yeah I haven’t been into too many so I haven’t been hit too many times in the face but when it happens you don’t necessarily feel it until after the fight because of the adrenaline.

You’re from Canada, but you decided to play junior hockey in the USHL and not CHL like many other Canadians. Why did you choose that route instead?
Yes I was born in Canada but I’ve have lived most of my whole life all over the states. So for me it was an easy decision to pick the USHL over CHL because it gives me more options for my future. You can only play hockey for so long and with the USHL it gave me a chance to go to a Grade A college; Wisconsin to play great hockey and also get a great education to fall back on after I was done playing.

You were drafted in the 5th Round by the Carolina Hurricanes in 2012, where were you when you found you were drafted and what was running through your head when it all happened?
I was in bed in my apartment, and I got a phone call from one of my teammates at the time, Mark Zengerle letting me know that I was drafted. At first, I thought he was talking about being drafted into something we had going on at our local bar on campus called the Kollege Klub, but then he goes ” No man, Carolina Hurricanes drafted you into the NHL!” so I was a little blindsided by it at first because I hadn’t spoken to any teams throughout that previous season, but at the same breathe I was on Cloud 9. Its every kid’s dream to get drafted in the NHL and it was surreal for me.

You scored your first professional goal this year. Where is the puck?
It is currently sitting on my Xbox in my room right now haha.

What has been the highlight of career?
I’ve had a few highlights; one would have to be playing overseas for my country in a tournament with a lot of star players, such as Justin Faulk, Nick Bjugstad, and Derek Forbort. Another was winning our league championship last year with Wisconsin and playing outdoors as well in Soldier Field, and obviously being drafted in the NHL and play my first game professionally was pretty cool!

Lowlight?
My biggest lowlight in my career was when I broke my femur and dislocated my knee in the fall classic my first year of junior, and being told by doctors my playing career could be over.

The next part is more of a rapid fire round, it’s where the reader gets to really know you.
Your dad played professional hockey. Any tricks you learnt from him?
I don’t know what you mean by tricks but he has helped me tremendously through a lot of obstacles every player goes through just from his past from when he played.

What’s the scariest thing you’ve seen on the ice?
Thankfully I haven’t seen anything too scary while I was playing but just the other night seeing Rich Perverley go down on the bench might have been the scariest for me.

Who’s your celebrity crush?
Haha my celebrity crush……hmmm I have a few. My top 5 are Minka Kelly, Jennifer Aniston, Blake Lively, Julianne Hough, and Selena Gomez.

Every team does pranks, and I’m sure that the Charlotte Checkers are no different. What’s the best prank you’ve seen or been a part of?
There’s always the usual shoe checks at the odd dinner, but I did get Chris Terry on a phone call break that was a recording that would call any number you put in and it was a recording of a guy asking him why he was calling his girlfriend. At first, I didn’t think I got him, but the next day the guys told me he was describing it to all of them at the back of the bus and saying how nervous he was not knowing who this random guy was confronting him of something he didn’t do. So we all got a few laughs out of that.

Your Twitter username is @SkeeterWoods21. What’s the story behind it?
Every freshman at school gets what they call Gomer Names selected by the seniors so that’s what i was given and it stuck and for some reason I decided to use that as my twitter account.

How do you spend your off days?
For the most part my days off are pretty low key, I just like to lay low and sit on the couch and watch TV. give the body a rest, maybe a hot tub at night is always a good choice.

Final questions:
Advice for aspiring hockey players?
Advice id give to kids would be do always have fun when you’re out there and to never take it for granted because you never really know when the last time you’ll be able to play the game.

One thought on “Interview with Brendan Woods!”