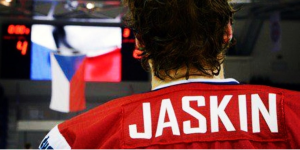 We recently caught up with Dmitrij Jaskin of the St. Louis Blues! Here’s a fun fact about him: he was drafted by HC Sibir Novosibirsk first overall in the 2010 KHL Draft! He was also drafted 41st Overall by the St. Louis Blues in 2011. He decided to not play for the KHL, and instead played for Moncton Wildcats of the Quebec Major Junior Hockey League, which owned his rights after selecting him 22nd in the 2012 CHL Import Draft. He made his debut this year, playing two games with the big club and is has impressed! His coach Ken Hitchcock has said, “I really like Jaskin a lot. He’s going to be a good player for us for a number of years.” NHL.com’s Adam Kimmelman said that Jaskin is St. Louis’ top prospect (http://www.nhl.com/ice/news.htm?id=679764). You can learn more about him by following him on Twitter here: https://twitter.com/DmitrijJaskin. You can follow me on Twitter here: https://twitter.com/HkyBlogger, and you can like our page here: https://www.facebook.com/NotYourAverageHockeyBlog. If you like our stuff, make sure to like, and share with your friends! It really helps us grow as a site! Enough with the jibber jabber, here is our interview with Dmitrij Jaskin!

We are in bold.

So first things first, how has your day been?

I’m back home in Prague, Czech Republic. I just keep working on my summer workouts and enjoy time with family and friends.

What’s a day in the life of Dmitrij Jaskin?

Same answer. It depends if its the summer or the winter.

What about game day? How do you get prepared for that?

I think everybody has same preparation before games. I wake up and have breakfast, go for a morning skating, grab some lunch, go take a little nap, and then get ready for the game.

What was it like to be drafted 1st Overall in the KHL, and 42nd in the NHL draft?

Getting drafted to the KHL was nice, but nothing special. I didn’t really know about the KHL draft. My father just called me when I was in school haha! Getting drafted in the NHL was different in comparison to the KHL. It was my first time going to the United States and everything was new to me. I didn’t really know what was going on ,but I just felt closer to realizing my dream of playing in the NHL.

Haha, so what was your reaction like at school when you first heard that you’ve been drafted?

I just couldn’t believe it. I knew I had good year but not like 1st Overall Pick good. Anyways, it was just a good feeling. Afterwards, like I said, nobody called me.

So you didn’t go to the KHL, but instead went to the QMJHL. When you first arrived at Moncton, how different was it from home?

It was a totally different country. New people, new family, it was different. Everything is about hockey, so there were a lot of new things for me.

If you make the team next year, what will you miss the most about Moncton?

I will miss everything. My Canadian family (Marc and Manon), my teammates, friends, all stuff around the Wildcats organization.

So you played two games this year for the St. Louis Blues. Can you describe the feeling when you walked out on to the ice of an NHL crowd for the first time?

I was a bit nervous probably like everyone’s first game, but it was the moment I’ve been waiting my whole life. It was something like living in a dream for a moment or fulfilling a dream. Just to get the first part of my hockey life part done which was to make it to the beast league in the world, the NHL.

Was there any pressure to score a goal in your NHL debut?

I didn’t really have a chance to score in my first game, but in the second game, I had a couple good shifts so I don’t think I had too much pressure on me.

What’s something you’ve learnt from playing internationally for Czech Republic?

Its something different, but when I’m playing against different players from different countries, I realize that its always nice to play for the country.

Highlight of your career?

I think highlight is my entire season last year and my first NHL game of course.

Lowlight of your career?

Lowlight probably when I was injured two years ago.

The next part of it is a rapid fire round. This is where the fan gets a closer connection to you!
Favourite Food?

Would you rather play without a helmet or without gloves?

I’d like play with my helmet and gloves haha!

Best way to spend a night at home?

Probably at home with my family, get some good food, and just enjoy the time with them.

What’s on your iPod right now?

On my iPod, probably everything. All kind of music; rock, pop, rep, disco, really whatever.

Who should we interview next?

I have no idea.

Again, I have no idea.

Thanks for your time.