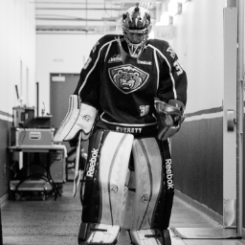 As suggested by Mirco Mueller, we caught up with Austin Lotz of the Everett Silvertips! He finished the season 15-19-3. Even though that doesn’t sound very pretty, he contributed a lot more off the ice as well! The Silvertips made the playoffs at the end though, so it’s a good ending to the story! Austin is also eligible for this year’s draft, and is projected to go in he mid rounds! You can follow him on Twitter @Lotzy30! You can also follow me on Twitter @HkyBlogger! You can “like” us on Facebook here: https://www.facebook.com/NotYourAverageHockeyBlog

How has your day been?
It has its ups and downs.
You watch Game 6 of the Stanley Cup Finals?
I was out to dinner with my friends so I missed the last 10 minutes.
Were you cheering for a specific team?
Chicago.
What’s something most people don’t know about Austin Lotz?
I like to bow hunt and spend a lot of time out doors.
Goalies are generally known as the most flexible players on a team. How easy is it to touch your toes?
Very, very easy.
There’s also an assumption that there are two types of goalies, quiet ones and crazy wild ones. Which group do you think you belong in?
I’ve been told that I am a quiet relaxed guy but I feel like I have an act to go crazy once in a while.
The Everett Silvertips barely squeaked in to the playoffs this season. In the first round, do you ease off the gas a bit because you’ve made of the playoffs, or do you push even harder and hope for the upset?
You always want to be a team to upset a favoured team. I’ve always been the under dog and I don’t mind that one bit.
To squeak into the playoffs, you have to give it more than everything you have. How do you continue pushing once you’ve made it into the playoffs?
You build off the energy from making the playoffs and it usually carries into the first few rounds.
You were also named to the 2013 U18 World Championship roster, so tell us what that was like?
It was a great experience. I got to meet a lot of new faces and some faces that I’ve heard or seen of. It was just great to learn from all the coaches and players I was surrounded by.
Even though you didn’t get to really play, what did you learn at the U18’s?
I learnt that just being involved on a gold medal winning team, even though I didn’t play, still makes you really proud to bring back that medal.
It’s you draft year this year. If I’m a GM of a team, and I ask you why I should draft you, what would you say?
I would give 100% every day in everything involving myself and the team to make the team better.
What has been the highlight of your career?
Making the Silvertips and winning gold in Russia.
What has been the lowlight?
There are a lot of downs in the season that I had to overcome.
How did you persevere from your lowlight?
Just remembering I play the game to have fun and to not take it too seriously.
We interviewed your teammate, Mirco Mueller. Do you have any funny/embarrassing stories about him?
Nothing that I can think of, just the fact that he makes a few speaking errors when it comes to speaking English.
The next part is a rapid fire round. Don’t think, just answer. Ready?
Favourite Food?
Steak
Weirdest thing you’ve ever eaten?
Shark
iPhone or Android?
Android
Playstation or xBox?
xBox
Favourite memory of Everett?
Game 1 of playoffs this year
Favourite place to hang out in Everett?
The beach.
What are the do’s and don’ts of meeting Austin Lotz?
Don’t take me seriously. I make a lot of jokes.
Ever had an awkward encounter with a fan?
Not really, I had oranges thrown at my car after a bad loss one time.
On a scale of 1-10 how nervous are you for the draft?
5
Final questions:
Who should we interview next?
Ben Betker
Advice for aspiring hockey players?
Never give up.
Thank you for your time.