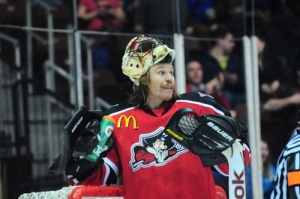 We recently caught up with Justin Pogge of BIK Karlskoga. Before Sweden, Justin has played in many countries, such as Italy, ECHL, AHL, and even the NHL. Originally drafted 90th overall in the 2004 draft, Justin played four seasons in the Toronto Maple Leafs organization before being traded to the Anaheim Ducks. He also has plenty of international experience, whether it be World Juniors or Spengler Cup. We’re not going to go in much further detail since that’s covered in the interview, but it’s a lot of experience! You can follow him on Twitter @pdiggler, and you can follow me on Twitter: @hkyblogger. You can also “like” us on Facebook here: https://www.facebook.com/notyouraveragehockeyblog

What’s a day in the life of Justin Pogge?

The day has been a great start.  I got up put my mountain bike in the truck, made breakfast, Eggs and Hash browns and a cup coffee. Its only 8:30 am.  A day in the life of me usually begins the same way as today.  After breakfast I take off for the gym, put in a two hour shift then head home and make lunch.  After eating I head out into the canyon for a ride on the trails.  I love mountain biking, surfing and my Motorcycle.

So some of our readers might not be 100% sure of who you are. So maybe introduce yourself?

I’m Justin Pogge, former WJC champion and goaltending journeyman.  I’m beginning my eighth season of professional hockey.  I recently signed with a Swedish second league team BIK Karlskoga.  My career has taken me all over North America and the world.  I made my NHL debut with the Toronto Maple Leafs.  My first win in that first start against the Atlanta Thrashers, we won 5-2.

What’s a cool fact about you?

A cool fact about me is that I have permanent socks.  I have got both of my feet tattooed.  Not at the same time, I had my right foot done first but once that was done the left looked so lonely.

Who was your favorite player growing up?

I admired a lot of goalies growing up among these names were Ron Hextall, Curtis Joseph, Roberto Luongo and Mikka Kiprusoff.

What kind of goalie are you?

I consider myself a hybrid goalie with good positioning.  Now I just try to do anything to get in the way.

Why goalie? Many people you talk to, the last position they want to play is goalie because they’re scared the puck will fly at their face.

I really don’t know why I ended up becoming a goalie.  My first hockey practice the coach put me in net with my player equipment.  I guess I made an impression because the next practice he told me to strap on the pads.  I don’t think it helped that I had a Mike Vernon look alike helmet with the cat eye cage.

Take us back to the draft, what was that like?

The 2004 draft was a special day for me even though I didn’t make my way down to Raleigh, North Carolina.  I had been watching the first two rounds on TSN, and then checking the third round on my computer.  The 89th pick came around and one of my friends Jeff Glass had just been picked by the Ottawa Senators.  That’s when my dial up internet cut out and the phone rang.  It was my agent calling and telling me that I had been selected 90th overall to the Toronto Maple Leafs.  I was so excited that I drove down to my mom’s work and told her the good news.  She cried and hugged me just like most moms would in that situation.  After visiting my mom I had to make my way to work.  I worked at a yacht club in Summerland, British Columbia.  The drive was about 30 minutes along the highway.  On the trip I stopped to tell one of the RCMP officers who was investigating a minor accident, he also was one of the hockey dads.  I yelled out the car window and got the thumbs up and continued to work.  I was bartending that afternoon for a special event.  I kept pretty quiet at work.  Once my shift ended I stopped off and got the cheapest champagne and headed to a barbecue with some of my best friends and popped the bottle and celebrated getting drafted!  While I was at work apparently the Toronto media was trying to get in touch with me.  Having no cell phone at the time made it pretty difficult to find me.

Representing Canada has been a huge part of my career.  I’ve been very fortunate to wear the Maple Leaf for Canada three times.  My first experience was for the U-18 championships in Minsk, Belarus.  We placed fourth but I got to miss a month of school.

What has been the highest point of your career so far?

My biggest accomplishment was playing for Canada in Vancouver for the 2006 World Junior Championship.  Not only was I representing Canada on the biggest stage, it was held in my home province.  Being named the starting goalie was a dream come true.  I actually wished for I left Calgary for the selection camp in early December.  I was playing for the Hitmen at the time.  During the holiday season the Calgary Zoo decorates in the Christmas spirit, this was called Zoo Lights.  Here is where I came across a Japanese wishing tree.  To make a wish on this tree you write down your wish on a ribbon then tie it to one of the branches on the tree.  My wish was to make the team and win gold.  My wish came true!  Playing in Vancouver was amazing, the support from the fans was intense and like nothing I have ever experienced.  We had a great team and ended up winning against the Russians 5-0.  I will always remember Steve Downie pretending to interview me before a defensive zone face-off with 30 seconds left.  He asked me what it felt like to win the gold for Canada.  I told him to take the damn face-off and laughed.  After that final horn sounded everything was a blur of excitement.

The next Christmas I was able to play for Canada in the Spengler Cup in Davos, Switzerland.  The tournament was a total change of pace from the previous year.  The experience was a ton of fun.  I got to spend Christmas and New Years in the Swiss Alps.  The Hockey Canada family is a tight knit group and I forever thanks for the opportunities they have given me.

You’re well-traveled, playing in multiple teams. Which team did you enjoy playing for the most and why?

My professional career has taken me all over North America. I started playing for the Toronto Marlies in the AHL.  Playing in Toronto was quite the experience.  Toronto is an amazing city that I learned to love over my time there.  My first taste of the big city wasn’t the most ideal way to start.  My truck had been stolen within the first month of being there.  Things definitely went up from there.  I have made some lifelong friends there that I still keep in touch with today.

What has been the lowest point of your career?

After Toronto, I was traded to the Anaheim Ducks.  I was headed to sunny California.  That season would turn out to be quite the roller coaster ride.  After Training camp I was sent down to the Bakersfield Condors of the ECHL.  I was in the coast for 9 games then I was called up to the Ducks for a couple days.  Then I was loaned to San Antonio.  I played for the Rampage for a couple months then was off to Albany when I was part of a trade with the Hurricanes.

Getting traded for the second time in one year was probably the lowest part of my career.  I had played on four teams in three different leagues.  I didn’t feel wanted.  I was living out of a suitcase, going from hotel to hotel.  The season ended for me early when I had torn my MCL in my right knee.

However, not everything was bad while I was up with the Ducks I had the chance to be a part of a charity event called “Ducks in Tux”.  We had to serve dinner for the season ticket holders in a ballroom atmosphere.  I will always remember this dinner because it is where I first laid eyes on my future wife.  The story goes like this.  There was a silent auction for our pocket squares which had our jersey number on them.  Being a call up I shared a ballet box with Matt Belesky.  I knew that to get people to bid on our squares I was going to have to walk around and sell.   While walking around, I came across this beautiful blonde hair green eyed girl.  I was too shy to walk right up to her so I walked up to her parents and got them to submit a bid. I was then introduced to Christina and I asked her if she would be my Vanna White and help me with my box.  I didn’t see her for the rest of dinner.  When the dinner was finished we got to mingle, that’s when I found Christina again.  We talked for a while and I ended up getting her number… the rest is history.  I asked her to marry me four years later.

What kind of character are you in the locker room?

As a goalie I’m pretty laid back in the room.  I like to sit back, listen to the music and drink my coffee.  Before every game, I play soccer to help me warm up.  15 minutes before warm-up I take a quick shower then get dressed just in time to walk on the ice.

So the next part is a rapid fire round, don’t think just answer.

Grilled cheese sandwich or poutine if I can find it.

iPhone 5 just got it and it’s my new toy.

What’s On Your iPod?

I have a random mix right now with the new Eric Church live album, Ted Nugent and Kendrick Lamar.

Who has the worst taste of music on your team?

Everyone who doesn’t like my music has bad taste haha.

Roommate on the Road?

My last roommate on the road was Ryan Hollweg in Portland, Maine.

I like to stick a cup to a player’s helmet before they head out on the ice.  The player skates around without a clue and no one says anything resulting in a good chuckle.

What Gets You Up In the Morning?

I have always been a morning person; I just feel that you have so much more time for activities.

Work on the little things and always have fun

Who Should We Interview Next?

One thought on “Interview With Justin Pogge!”