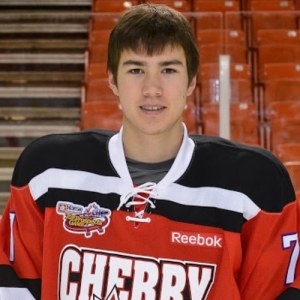 We recently caught up with Eric Roy of the Brandon Wheat Kings! He’s eligible for this year’s draft and is projected to go in the first three rounds. Just a little fact about him that shows his dedication. He’s from a remote town named Beauval, Saskatchewan. In Beauval, there isn’t a hockey rink. So as a result, his family would have to drive him 300+ KM Round trip for practices and games. Talk about dedication! You can follow him on Twitter: @Royzy07 . You can follow me on Twitter: @HkyBlogger. You can also “like” us on Facebook here: https://www.facebook.com/notyouraveragehockeyblog

Got an opinion? Comment below, shares and likes are well appreciated as well!

As per usual we are in bold.

So what’s a day in the life of Eric Roy?

I get up and usually eat about 7 meals a day, hang out with friends, watch some NHL hockey. I also workout twice a day during the off season.

I’m a prankster, friendly and I get along with everyone.

Do you feel like you have to play a leadership role on the team since there are players who are three years younger than you?

Yes, I did take on a leadership role. Obviously we had a younger team this year but it was up to me to show them what it takes to play in the WHL.

What kind of defenseman do you consider yourself?

I consider myself a two-way Defensemen.

Would you consider this season an off-year?

We had our ups and downs but I feel we got better as the year went along.

It is your draft year, if I’m a GM and ask you to tell me why my team should draft you, what would you say?

You should draft me because I love to play the game and I’m willing to work hard and do whatever they want me to do for my development.

You were selected to play in the CHL Top Prospect game, so can you tell me a little about your experience there?

It was exciting. I felt very honoured to be there to represent my team. I also learned how to deal with the pressure. There was over 10,000 people there.

Is playing with the Top Prospects different from playing in a regular WHL game?

It was a little bit different. The prospects game was fast and intense and there are lots of good players at it. It was a lot of fun to play there.

What has been the highlight of your career so far?

If I get drafted, it will be the highlight of my career, can’t wait till the day.

What has been your lowlight so far?

My plus minus this year.

How did you persevere from it?

We’ve interviewed your teammate, Nick Walters, are there any secrets you could expose about him?

He’s a good guy not many secrets about him.

The next part is a “lightning round”, are you ready?

One thing you can’t live without?

How do you kill time?

Best buddy on the team?

Every team does pranks, what’s the best prank you’ve seen?

Sticks and equipment taped together

What’s on your iPod?

Any advice for aspiring hockey players?

Never give up, Keep pushing yourself harder everyday.

Who should we interview next?

Thank you for your time. We wish you the best of luck in the upcoming draft.

2 thoughts on “Interview With Eric Roy!”