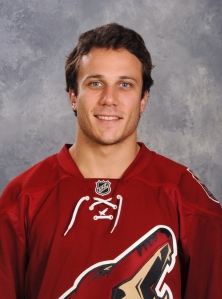 We would like to present to you, our interview conducted with Andy Miele. This has been a long time coming, and we’re glad to say it’s finally here. When I first asked for interviews, he was probably the first person to reply. It’s special when a hockey player replies, its even more special when a Hobey Baker winner, Team USA player, and a player with NHL experience replies. To our readers who many only know about the NHL and not much about college hockey, the Hobey Baker award is awarded to the NCAA player who best “exhibits strength of character both on and off the ice” and “contributes to the integrity of the team and displays outstanding skills in all phases of the game” (wikipedia.org). Previous winners include: 7 time All Star Paul Kariya (1993), starting goalie for the silver medal winning Team USA in the 2010 Olympics Ryan Miller (2001), and two time Olympian Chris Drury (1998). Before we start the interview, if you want to learn more about Andy, you can follow him on Twitter: @Andy_Miele and if you want to learn more about us, “like” us on Facebook here: http://www.facebook.com/NotYourAverageHockeyBlog

So without further to do, here is the interview!
Our questions are written in bold.

What’s a typical day of Andy Miele?
Typical day is wake up about two hours before practice, have breakfast, then head over to the rink, sometimes walk sometimes drive. After practice if I don’t have any errands to run the roommates and I hang out on the couch and watch tv. Usually make lunch, then we will make dinner or head out to dinner. Second half of the year I will be taking a class so ill be a lithe more busy.

You are on the advisory board of You Can Play what’s that like?
It was a honor for me that Patrick Burke asked me to be on the Board and it is really exciting to see how much it took off.

What was your last year of college hockey like?
Obviously winning the Hobey Baker my last year made things very exciting for me my senior year. I had great support from the team, coaches, family, and my girlfriend.

What was it like to win the Hobey Baker Award?
Winning the Hobey was amazing and nothing I ever expected to receive. I loved every minute of it and is a memory that will be with me forever and such an honour to be apart of such a prestige group of people and players.

Probably most of our readers won’t become NHL players, so tell us, what was it like signing a contract with the Coyotes?
Signing an NHL contract was obviously a dream come true, one of my regrets is I didn’t do it in front of my parents, brother and sister. It was also a relief to finally get that decision done with and get back to playing hockey.

What was it like playing the seven games in the NHL?
Playing in the seven games last year was amazing and a huge learning experience obviously. Wasn’t as successful as I hoped to be but I learned so much from it and will come back better and stronger when this lock out ends.

Representing USA during the World Championships. What was that like?
Putting on the USA jersey was amazing, it is so hard to represent your country in this world so to of been able to do it was such and honour and I hope I will get another opportunity to wear it again.

A little bit about your past before high school.
Did you play another sport besides hockey?
I pretty much played all sports but football. Basketball is my second favorite sport, besides my height haha.

What was your highest point of your career?
Hard to choose one point as my best.

How about your lowest? And how did you persevere from that? And do you have any advice for aspiring hockey players?
My lowest would probably have to be minor hockey growing up. Was always smaller and weaker than most. So to all kids out there never give up on the sport you love.

Last question. Are there any hockey players we should try to get for an interview?
Have a good buddy who plays D-3 that would love to do an interview, his name is Jerry Freismuth